Today is the last day of Funko Fair 2022, and they’ve saved the best for last. This is especially true if you’re a fan of the Pokemon Funko Pops since Wave 10 is now available! Lapras, Leafeon, and Piplup are all included in the roster. Pre-orders are currently available on Entertainment Earth. Additionally, you may get the set with protection at Walmart. Target also has a Jumbo Lapras exclusive.

Funko’s Pokemon wave 10 follows the release of wave 9 earlier this month as part of the celebrations around the release of Pokemon Legends: Arceus. Sylveon, Lucario, and Alakazam are among the Pokemon Wave 9 Funko Pop figurines, and pre-orders are currently available at Entertainment Earth and Amazon. 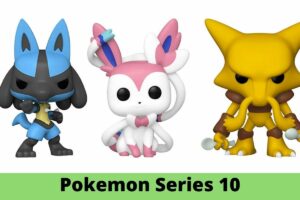 Additionally, you can get the wave at Walmart as a complete bundle with a protection case. It’s encouraging to see Funko delving further into Pokemon Pops rather than sticking to their usual tactic of producing countless versions of already released figurines.

As previously stated, the new Pokemon Funko Pop wave was published in conjunction with the Funko Fair 2022 event, which takes place between February 15th and February 18th. Using our Funko Fair master list, you can keep track of all of the new Pop figure pre-orders from the event.

Must check: Studio 666′ frontman Dave Grohl talks about the band’s emotional connection to Seattle in the upcoming horror film.

Regarding Pokemon Legends: Arceus, you can purchase the game here on Amazon. Below is a summary of the game.

“Prepare yourself for a new sort of great Pokémon adventure with Pokémon Legends: Arceus, a brand-new game from Game Freak that combines action and exploration with the Pokémon series’ RPG origins. By observing Pokémon’s habits, creeping upon them, and tossing a well-aimed Poké Ball, you may capture them in natural areas.

Additionally, you may throw the Poké Ball carrying your friend Pokémon near a wild Pokémon to join the fight effortlessly. This unique perspective on Pokémon games will provide an engaging, personal experience that both Pokémon and humans will enhance.”

That Time I Got Reincarnated as a Slime Season 3 Release Date Officially Confirmed or Not?

Anne With An E Season 4 Release Date, Trailer, News And Much More