We’ve said it before, but the year 2021 was unquestionably the Year of the Foo. Foo Fighters have garnered more attention than Kanye West on his way to the Super Bowl this year, thanks to a new album, their pandemic-delayed 26th-anniversary tour, which saw the rock giants reopen arenas on their way to being inducted into the Rock & Roll Hall of Fame, and an innumerable number of side projects.

Speaking of the Super Bowl, Dave Grohl and the rock ‘n’ roll ambassadors have continued their omnipresent ways into the new year, performing a virtual reality performance after the big game and planning a busy spring/summer tour itinerary that includes a stop at T-Mobile Park on August 13 in Las Vegas.

But first and foremost, for a band that seemed to have done it all, there is yet another first: The Foo Fighters’ new horror-comedy film, “Studio 666,” will be released in cinemas on February 25. The film stars the band’s six members as themselves. 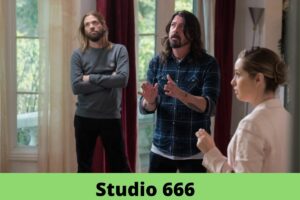 “Studio 666” follows the fictitious Foos to record a new album in a haunted home before things become murderously complicated. The clip seems to be a cross between “Evil Dead” and a lunchbox band movie, complete with campy gore and spectacularly corny one-liners.

Earlier this month, we spoke with Grohl, who now resides in Los Angeles, to talk about the horror film set in the middle of nowhere, his loan of a bassist’s throne to a Seattle bassist who was shot while confronting an Idaho gunman, and how he feels a mixture of “melancholy” and “gratitude” whenever the Foo Fighters are back in town.

Tell me about the film’s concept and how it came to be. What was it about a horror-comedy film that drew you in?

We didn’t do that! It’s not something I ever anticipated the two of us doing together. It was simply a bizarre series of coincidences that brought everything together. I resided in the home shown in the video around ten years ago.

I leased it for a year while renovating my own home, which was only a few blocks away. It was important to me that when it came time to begin creating songs for “Medicine at Midnight,” I had a small demo studio set up someplace where I could be alone and concentrate on writing all the music.

And at the same time, my previous landlord informed me that he was planning to sell the property. “Would you want to purchase it?” It is not my intention to move in, but it would be fantastic if I could record some music. “All right, go ahead and do it,” he says. As a result, I created a little studio in the space.

Meanwhile, a buddy of mine phones me and informs me that “there are these individuals who want to produce a horror film with the Foo Fighters,” as he puts it. I’m thinking, why would we ever do anything like that? It’s not in the cards.

Then I go back to this eerie old home where it all started. Hold on a second, I think to myself. We already have the home, to use an expletive.

We may as well start recording here, finish recording here, take a couple of weeks off, and then shoot some low-budget, run-and-gun, slasher-style long-form video while we’re at it, right? The project then grew into a full-length feature film due to the snowball effect.

What does this mean? Is no one in the band a die-hard “Army of Darkness” fan?

No, not at all. We may be a little more preoccupied with horror than the average fan, [but] we are by no means connoisseurs. Taylor Hawkins has a rather extensive collection of horror films that he enjoys. Most of them are from the 1970s and 1980s. I’m in the same boat as you. Classical music appeals to me.

I like “The Exorcist,” as well as “The Shining,” “Amityville Horror,” and “Halloween.” [Expletive] and other films of this kind. In addition, I like recent releases such as “The Witch” and “Midsommar.” Fangoria, on the other hand, I don’t believe has ever had a subscriber.

Were you the one who wrote the story?

No. I swear to God, it’s as easy as this: “Oh, my God, we’ve got this house.” Imagine we were making a movie about the Foo Fighters moving into a home they didn’t understand was haunted, and I was possessed by the ghost of the house and murdered everyone in the house before going on the run.”

That was the underlying principle of everything, and that was the end of it. Then we tracked down the screenwriters and gave it over to them, and [they] turned it into a real movie for us.

Compared to the documentary film projects you’ve worked on in the past, how did this one compare?

It’s a whole different story. If you’re filming a documentary, you’re trying to humanize the experience or process of making music. This was a whole different animal. My imagination ran wild as I tried to envisage what it would be like to film a [expletive] movie, which included many hurry-ups and waits.

“Go put on your artificial teeth and your contacts, and we’ll be back here in three hours,” was a common refrain. Afterward, you find yourself seated in a room, attempting to read the newspaper while wearing a [expletive] prosthetic demon mask. Let’s say that I’m sticking with my day job. It’s not something I’d want to do regularly.

Were you emotionally connected to them when you were younger?

Yeah, I mean, here’s the thing: back in the 1960s, 1970s, and 1980s, artists would not only record albums and do live concerts, but they would also tour the world. A large number of them went on to make films.

A few examples are Prince’s “Purple Rain,” or A Hard Day’s Night,” as well as Kiss’ “[Kiss Meets the] Phantom of the Park,” and the Ramones’ “Rock ‘n’ Roll High School,” among others. Even the [Expletive] Spice Girls were inspired to make a film.

In addition to being an additional source of entertainment, seeing the same ensemble that you’re accustomed to seeing perform music or perform on stage attempt to find their way into the screen was always entertaining, particularly for fans. This is because most artists were not cut out for [expletive] Academy Awards.

In the same way as “Purple Rain” – I [Expletive] adored “Purple Rain.” I watched it in the cinema when it came out, and I remember thinking he’s so unnatural. It didn’t feel like he had a chance to win the best actor, but I enjoyed it all the more because of that.

There’s something about musicians in films, especially band movies, that I’ve always liked. It has a certain amount of kitsch appeal or value to it. The [Expletive] Foo Fighters did a horror picture, and when you tell people about it, they sort of laugh. “Uh, what?” they exclaim in surprise.

Were you feeling any more emotional at that specific concert with everything going on?

Every time we play up there, there’s certainly a more nostalgic atmosphere than, say, Kansas City or even Washington D.C., where I’m from. Seattle has been important to the Foo Fighters since they grew up.

Did you ever regain control of your throne from that Greyhawk jerk?