Netflix has released the trailer for Rescued By Ruby, the upcoming biographical comedy-drama starring Arrowverse star Grant Gustin. The video follows a state police officer who adopts and trains a shelter dog to become a K-9. On Thursday, March 17, the film will be available for streaming.

Rescued By Ruby is directed by Katt Shea from a screenplay by Karen Janszen. Grant Gustin (The Flash), Scott Wolf (Party of Five), Camille Sullivan (Normal), Tom McBeath (Stargate SG-1), and Kaylah Zander are among the cast members. 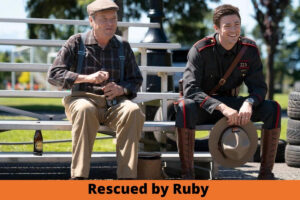 “State trooper Dan aspires to join the K-9 Search and Rescue squad, but no one will consider him. “Shelter dog Ruby longs for a home but is running out of options,” the blurb reads.

Also check: Atelier Sophie 2: The Alchemist of the Mysterious Dream is Coming Out Soon

“When fate brings Dan and Ruby together, it is their unbreakable friendship that enables them to overcome their most difficult obstacle to date.”

Gustin has not appeared in a feature-length film in five years since William H. Macy’s coming-of-age drama Krystal. He is perhaps best recognized for his portrayal of Barry Allen/The Flash on The CW’s Arrowverse programs. He has been portraying the DC superhero for about a decade.