Christina Applegate told how challenging it was to film the last season of “Dead To Me” while dealing with multiple sclerosis-related symptoms (MS).

“If I’m standing in the doorway at the front door, usually Mitch [Cohn, from the show’s sound department] would be laying on the floor holding my legs,” she explained.

Keeping her from tripping on set required “a ballet dance,” she said.

In the summer of 2021, while in the midst of filming the third and final season of the hit Netflix program, Applegate was diagnosed with multiple sclerosis.

Multiple sclerosis (MS) is a neurological illness with a wide range of symptoms, including difficulties with vision, speech and mobility (NIH). According to the site, it can also lead to cognitive problems like those mentioned above.

Breaks in the myelin sheath a protective covering for the nerves lead to the disease. Some of the symptoms listed above may develop because of the disruption in communication between the brain and the rest of the body that this damage causes to the nervous system.

The star of “Married…With Children” revealed to the New York Times that there was talk at Netflix of halting filming entirely, but despite taking five months off, Applegate still refused to let production wind down early.

“For my part, I emphatically rejected this idea. Yes, we will, but only on the conditions I was telling the Times,” she reportedly said.

Applegate revealed in an interview with Variety that her character Jen’s blocking was occasionally altered since she was unable to walk the distance necessary for a scene.

The 50-year-old star has been acting since she was 5 years old, but she said, “With my disease, I don’t know how capable I am” to the website. She has hinted that her role as Jen may be her last. 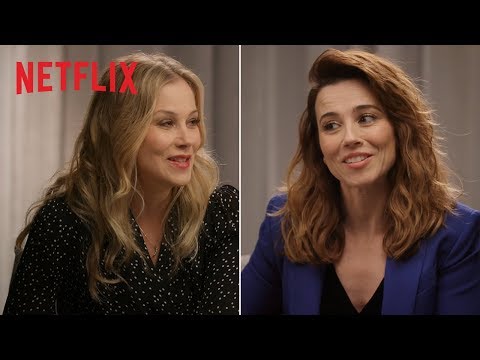 She went on to say that it was “a gift to me” to be able to wrap up filming “Dead To Me” with co-star Linda Cardellini and realize director Liz Feldman’s vision for the project.

The dramedy about two women who meet in a bereavement group deals with illness in its last season. According to Applegate, Feldman purposefully waited until the penultimate day of filming to film a scene in a bedroom because she knew it would “make all of us hurt.”

The “Bad Moms” star said she utilized comedy in filming to “sort of keep my wall up” after being diagnosed with multiple sclerosis.

Behind The Scenes of Dead To Me

You’ve likely already seen Dead to Me. Do yourself a favor and stop reading this right now and go watch it.

A recently widowed man attends a support group and unexpectedly bonds with one of the other members. That is as non-spoilery a description of the show as I can give.

Now, learn some interesting trivia about the show’s production! Keep your eyes peeled for spoilers. Read about Dead To Me final Season details. Is the new season coming?

The majority of the team’s members were women

The series is a triumph for female filmmakers, from creator Liz Feldman to writers Christina Applegate and Linda Cardellini and directors Amy Heckerling and Rebecca Taichman.

She wrote an article for Glamour in which she discussed how her own difficulties having children had prompted the program.

To paraphrase a famous quote: “Turning 40 may be a genuine mind bender, especially if you’re on fertility meds and trying to become pregnant for what feels like the 600th time.”

Feldman lost her dearly loved cousin, David, to a heart attack at the same time she turned 40 and began attempting to conceive.

She created a piece of writing on her travels

Although the story is not autobiographical, it is very close to the author’s heart. While the details are fictional, the emotions are not.

In certain cases, actors would make up their own dialogue

Christina Applegate and Linda Cardellini had such great chemistry on set that the cameras never stopped rolling when their lines ended.

They would just make up dialogue as Jen and Judy and act it out. At Christina Applegate’s urging, we tacked on Jen’s double mastectomy.

Applegate underwent a double mastectomy much like Jen. Both she and her breast cancer-surviving mother possessed the BRCA1 gene.

Applegate inserted the anecdote to better comprehend Jen’s frustrations and to raise awareness among female readers about the effects of a mastectomy.

While filming the car-crashing sequence, Applegate suffered a nervous breakdown

Jen would get into her character’s automobile after each take of her crashing a car and cry next to Cardellini. Her body didn’t know she was acting angry, Cardellini replied when she asked why she was crying.

Their responses in some scenes were improvised

Jen opened the balloon that contained her son Ted’s birthday note after the celebration concluded. Seeing the note with the words “I wish I could still play Wrath of Hades with you” made Applegate cry, therefore the decision was made to keep it in.

In the same vein, Judy’s reaction to hearing the news of Abe’s death was completely unrehearsed.

The emotional scenes were the most challenging for them

They enjoyed it when Jen and Judy would plot together or crack each other up. Those were considerably more effective than their sobbing acts. “I was like Oh, I don’t cry today! Fantastic,” she said.

Christina Applegate was the only one who could have played Jen.

Christina Applegate talked about how someone held his legs during some scenes so that she could not fall. There were also some scenes in Dead to Me in which they need to improvise. I hope you enjoyed our article. If you have any queries related to this post you can tell us in the comment section.