Fedora 36 is one of the year’s most anticipated releases. While we anticipate each major release, Fedora 35 set some exciting expectations last year with GNOME 41 and a new KDE flavor (Kinoite).

Not to worry; if you’re unable to wait for Fedora 36, I’ll highlight the most important aspects of the release.

Fedora 36 – When Will It Be Released?

After completing public beta testing, the final release is scheduled for April 19, 2022. In the event of a delay, the release date will be pushed back to April 26, 2022.

Additionally, Fedora Linux 34 will approach the end of life on May 17, 2022. You can download Fedora 36 now via a nightly build (listed at the bottom of this post), but with only a few weeks until the beta release, you should hold off. 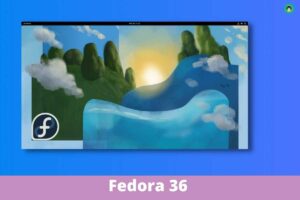 Fedora 36, as usual, has the newest GNOME and other enhancements and improvements. Among the highlights are the following:

GNOME 42 is an exciting upgrade that introduces several new cosmetic and functional features.

Additionally, it offers performance and cosmetic changes and other enhancements. If you missed the additions to GNOME 41 features, you should also check that.

Naturally, you should anticipate finding all the changes in Fedora 36. I’ll highlight those details here using Fedora 36 (if you missed GNOME 42).

Dark Mode for the Entire System

The dark mode seamlessly fits the environment and provides a clean GNOME experience.

Without a new wallpaper, any other enhancement will sound insignificant. Thus, the Fedora Design Team includes a nicely designed wallpaper in Fedora 36 that depicts an attractive scene painting.

The default wallpaper includes a day/night version. As you can see from the daytime background above. Both are visually stunning and calming to the eyes.

Also check: Westworld Season 4: Who We Know, What We Know, and When We Know It

Fedora 36 is well-known for providing the most recent Linux kernel versions. It is presently running beta versions of the future Linux Kernel 5.17. Fedora 36’s final release should include the stable version of Linux Kernel 5.17.

As of now, while trying Fedora 36 Workstation (pre-release version), I’m only able to locate one of the wallpapers, rather than the entire set included with GNOME 42.

As a result, you can anticipate further additions with the Fedora 36 beta release. You can choose between dark/light variants of the wallpapers in appearance.

GNOME 42’s new screenshot user interface is an excellent improvement. Additionally, with a single toggle, you can begin recording your screen! And you can see this in action with Fedora 36, which runs flawlessly.

Updates to the desktop environment

For obvious reasons, Fedora 36 will have the latest desktop environments. The basic minimum should be GNOME 42, KDE Plasma 5.24, and Xfce 4.16. Additionally, LXQt has been updated to version 1.0.0.

Along with the cosmetic modifications and the Linux kernel upgrade, Fedora 36 includes several technical upgrades.

Several of these are worth mentioning:

Is Horimiya Manga over or Is It Getting A New One?