If there is one thing that Westworld will leave you with, it will leave you with more questions than answers. HBO’s popular sci-fi/western-turned-dystopian series is well-known for keeping its viewers on edge, as the season 3 finale demonstrated.

HBO announced Westworld season four in April 2020, during the height of the COVID-19 pandemic. However, there were few specifics included in this renewal notice. Given how the third season concluded, most of us have numerous unanswered questions.

Therefore, let us immediately discuss what we know about Westworld season 4! 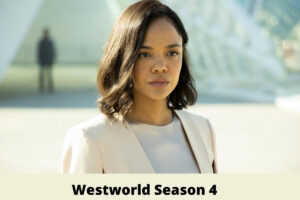 One thing is certain: Westworld will return for a fourth season. However, we have no idea when HBO will release this season. Season 4 filming began in June 2021.

However, given the show’s significant reliance on special effects, it takes longer to produce the entire season than a conventional series.

By that logic, the fourth season should be released this year. We can anticipate a delay and possibly a release date near the end of the year, owing largely to the setback created by the epidemic.

Who Is in, Who Is Out, and Who Remains?

If you’re a genuine Westworld fan, you’re aware that a character’s death does not always imply the actor’s departure from the show. Many of the show’s characters are androids, so their personalities may be uploaded to another unit even after they die.

There have been no announcements regarding new additions to the core cast thus far. We can anticipate seeing some familiar faces. Aaron Paul (Caleb), Thandiwe Newton (Maeve), Luke Hemsworth (Ashley), Ed Harris (The Man in Black), and Jeffrey Wright are among those who appear (Bernard).

One prominent character whose fate on the show is unknown is Dolores, played by Evan Rachel Wood, whose mind was fully erased after the third season’s finale.

In an interview with Variety, Westworld co-creator Jonathan Nolan confirmed that “Dolores is gone.” However, as previously said, because Wood’s character was an android, we are unsure whether she has left the show or not.

Nolan continued to clarify in the same interview, “I believe it is necessary to commemorate the event with Dolores on a program in which death might be brief – after all, these are machines. That incarnation of that character has vanished.”

According to this comment, Wood is quite likely to return to the show, but not as the character we’ve grown to love over the last few seasons.

According to Deadline, one additional cast member has been confirmed: Aurora Perrineau of The Prodigal Son fame. However, there is little information regarding her character other than that she appears in around five episodes during the fourth season.

What Can We Expect From Westworld Season 4?

Westworld’s future intentions have been kept largely under wraps. On the other hand, Thandiwe Newton disclosed the following information at The Paley Center for Media: “I have no idea what they’ve got in store for me,” the actress admitted. “I am aware that I am partnered with Tessa [Thompson]. Hopefully, we can inflict some justifiable harm.”

We don’t know about you, but the prospect of Newton and Thompson collaborating and wreaking havoc has us utterly invested and excited for the fourth season!

In the same Variety interview noted before, Nolan was asked whether they will return to the park or the actual world for the future season, to which he responded, “We love you and say this with the utmost respect, but there is no way on earth we will answer that question!”

It is not to imply he said nothing. Following the season 2 conclusion, Nolan stated in a 2018 interview with The Hollywood Reporter, “The hosts have a unique perspective on mortality, a unique outlook.

As Dolores has stated, there is a longer view here, a broader set of objectives. They are existential. They span millennia. And that is an enthralling level of the tale to be involved in.”

Westworld season 4 is anticipated to pick up decades, if not centuries, later, with the globe appearing drastically different. After all, there are no boundaries in Westworld.