Val Kilmer is unquestionably one of this generation’s best actors, and he possesses the credentials to make the remark mentioned above. Kilmer has been in the industry since 1984 and has achieved considerable success with films such as ‘Top Gun’ and ‘The Doors.’

His part in ‘Top Gun’ established him as a celebrity and household name. He and Tom Cruise built a strong friendship throughout the making of the picture. Kilmer collaborated with a slew of Hollywood A-listers over his storied career, and his legacy will be chronicled in the forthcoming documentary ‘Val.’

The documentary would chronicle some of Kilmer’s most intimate moments in his professional and personal life.

Kilmer has amassed a fortune for himself and his children with his wealth of acting expertise. Let’s delve a little further to learn more about the actor and his career earnings. 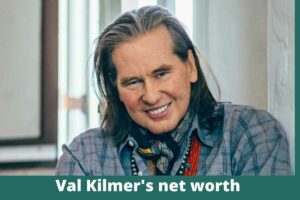 On December 31, 1959, Val Kilmer was born and was the family’s eldest son. He was the youngest person to be accepted into the Juilliard School’s Drama Division at the time.

When he was eight years old, his parents split, and his world came crashing down when his younger brother perished in a Jacuzzi at the age of fifteen.

He gathered his wits and pursued acting as a career. Kilmer co-wrote and starred in the 1981 play ‘How It All Began’ as a student at The Juilliard. The actor declined a role in Francis Ford Coppola’s 1983 film ‘The Outsiders due to prior commitments to the theatre.

Kilmer co-starred with Tom Cruise in ‘Top Gun,’ which catapulted him to stardom. His superb acting earned him significant roles in several other productions, and he delivered another standout performance in Oliver Stone’s ‘The Doors.’ He portrays Jim Morrison, a legendary musical personality.

Kilmer would star in the 1995 film ‘Batman Forever’ as the famous comic-book character Batman. Kilmer accepted the part despite not knowing who the new director was or seeing the screenplay.

The film was a box office hit, grossing $336.6 million worldwide. The role catapulted him to stardom in popular culture, and he was hailed as one of the best performers to portray the caped crusader.

However, he did not return for another Batman feature film, and George Clooney was cast as the Dark Knight in his place.

In 1996, Kilmer enrolled in the cast of ‘The Island of Dr. Moreau,’ an ill-fated movie whose chaotic production has become legendary in the cinema world.

He starred in ‘The Saint’ a year later, a picture that showcased Kilmer’s extraordinary range and poetic abilities. Kilmer began the decade of the 2010s with a string of performances in horror films such as ‘The Traveler’ and ‘Twixt.’

In 2018, it was reported that he would reprise his role as Lieutenant Tom ‘Iceman’ Kazansky in the upcoming ‘Top Gun: Maverick’ reboot.

Also read: Danny Glover’s net worth and pay for ‘Lethal Weapon 4’ are both very high.

His outstanding acting in films such as ‘Top Gun’ and ‘The Doors’ established him as a major celebrity, but it was ‘Batman Forever’ that catapulted him to new heights.

As a result, his income grew as well. He was compensated $7 million for his role as the Caped Crusader. The sum is equivalent to $15-$20 million in today’s money.

Meanwhile, he made $7 million in 1997 for ‘The Saint’ and $6 million for co-starring in ‘The Island of Dr. Moreau’ with Marlon Brando. He earned $13 million that year, making him one of the highest-paid performers of the year.

The actor owned a 6,000-acre ranch in New Mexico that he desired to convert into a resort. The home included seven bedrooms and eight bathrooms.

However, due to tax complications, the ranch was put on the market that same year and eventually sold in early 2011 at a significant discount to the $33 million asking price.

Kilmer sold a second section of the property in the years that followed. He retains approximately 160 acres of the land.

The actor won his first major award for Kiss Kiss Bang Bang.’ During the occasion, he was presented with the Best Supporting Actor trophy.

Kilmer made many flights to New Orleans in 2005 to assist with Hurricane Katrina’s rescue efforts. He is also an advocate for Native American issues and environmental protection.

How much is Val Kilmer worth?

His net worth is estimated to be approximately $25 million by Celebrity Net Worth. The majority of his earnings have come through acting.

With the publication of ‘Val,’ the actor’s name has been reintroduced to the public eye. The documentary premiered to a standing ovation at this year’s Cannes Film Festival.

On August 6, ‘Val’ will make its world premiere exclusively on Amazon Prime Video.

Tyler Herro Net Worth 2022, Family, Wiki, Endorsements, and Much More