Take a peek at 15 minutes of gameplay demonstrating the new Simulacrum arena survival mode, which will be included in the Risk of Rain 2: Survivors of the Void expansion.

The simulacrum is available in single-player and multiplayer modes. For March 1, 2022, Risk of Rain 2: Survivors of the Void will be released on PC.

Risk of Rain 2 takes a similar strategy to the first game, in which one to four players must travel through a series of stages while eliminating adversaries. 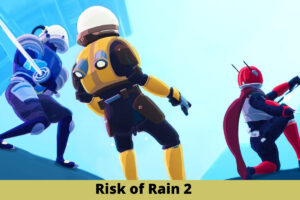 The objective of each level is to discover a randomly placed teleporter; once activated, players must defend themselves against an onslaught of aliens, including bosses, until the teleporter fully activates.

Killing aliens earns you experience and gold, which you can use to open chests that contain random goodies scattered throughout the level. These collecting goods provide various benefits to the players that own them, including synergistic effects and the ability to stack effects when many copies of the same item are acquired.

Must read: What time will ‘Jeen-Yuhs Act 3, ‘Awakening,’ be available on Netflix?

However, the aliens’ strength, difficulty, and population increase every several minutes, making the game tougher the longer players remain on any level.

Risk of Rain 2 retains several of the first game’s playable characters, creatures, and equipment but moves the game from a 2D to a 3D world.