Take a moment to exhale, Flexi enthusiasts. Maude Apatow (Lexi) of “Euphoria” opened up on the show’s future, and it appears as though Angus Cloud (Fezco) will remain in it.

Lexi performed a play named “Our Life” on Sunday night’s program, which was earlier dubbed “Oklahoma,” where she intended Fez to sit front row.

The episode does not detail why he did not appear, but a preview implies that he was set up for Mouse’s death by Faye and Custer.

The trailer depicts a bloodied Fez crying on the ground, and many fans believe his demise is coming. After all, he was intended to perish in the first season. However, Apatow seemed certain that Fez would be fine.

Entertainment Weekly recently questioned the star if she believes the romance between Lexi and Fez would be explored further. “Oh, absolutely,” Apatow replied. 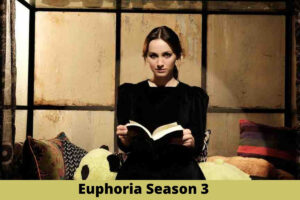 “I don’t desire to give anything away, but I think it’s rather refreshing when a relationship feels so innocent and nice, as when they didn’t even kiss in the last episode.

They hold hands, and the tension is slowly developing. And I believe that in comparison to a lot of the other things that happen on the program, it sticks out quite a bit.”

Also check: Release Date: “the Wilds” Season 2 Is Coming Out Soon. This Is Our First Look at the New (Male) Castaways!

Additionally, Apatow stated, “I enjoy collaborating with Angus. I believe Angus is a fantastic actor, and we have a great deal of pleasure working together.

Therefore, for selfish reasons, I hope we get to work together on more scenarios because it’s exciting.” We are still unsure what will become of Fez, but if this is foreshadowing, we are overjoyed!