Netflix unveils the official trailer for the upcoming Swedish action movie Black Crab, which stars BAFTA nominee Noomi Rapace as a soldier seeking her long-lost daughter in a post-apocalyptic world. On March 18, 2022, it will be accessible for streaming. 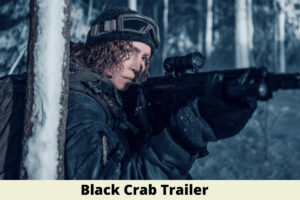 The blurb describes the Swedish action thriller as “set in a post-apocalyptic planet ripped apart by war.” “Throughout a long, brutal winter, six soldiers undertake a covert operation across a frozen archipelago, risking their lives to deliver a mystery item that has the potential to end the war.

They have no idea what hazards await them as they approach hostile enemy territory or who — if anyone — they can trust. However, the purpose is altogether different for speed skater turned soldier Caroline Edh.”

Must check: Monark Release Date – When Will Monark Be Available?

Rapace is most well-known for her role as Lisbeth Salander in the Girl with the Dragon Tattoo trilogy. The new project is her fourth with Netflix, following 2017’s action fantasy Bright, science fiction feature What Happened to Monday, and action thriller Close.