This past Monday reality TV stars Julie and Todd Chrisley were given lengthy prison terms in a federal court. Todd and Julie Chrisley, stars of USA Network’s hit reality series Chrisley Know Best have been sentenced to a combined total of 19 years in prison.  As if that weren’t bad enough, they were found guilty of several tax crimes including attempted fraud against the IRS. We will read what crime the couple did.

For Which Crime Tod and Julie Chrisley Get Prisoned

At a press conference following Peter Tarantino’s sentencing, US Attorney for the Northern District of Georgia Ryan Buchanan announced that Tarantino had been given a three-year prison term and a three-year term of supervised release. The Department of Justice claims that the Chrisleys lied on their loan applications, bank statements and audit reports in order to get the money they needed.

According to a press release, the stolen funds were spent on “high-end” goods such as automobiles, clothing, jewelry and vacations. Later, the Chrisleys and their accountant plotted to defraud the IRS and avoid paying back taxes that they owed while the family was making millions from their former reality show.  Attorney Alex Little of Burr & Forman LLP who represented the Chrisley family said in a statement released late Tuesday, “Yesterday was a difficult day for the Chrisley family”. 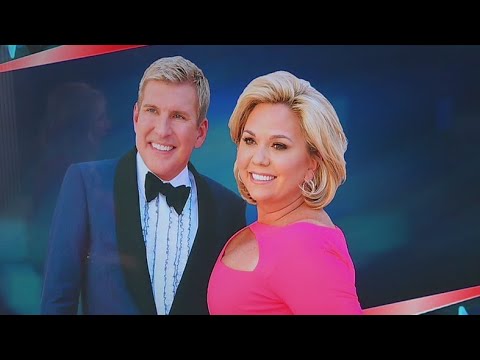 But because Todd and Julie are religious people, they have the fortitude to challenge their convictions on appeal. We are optimistic about the future,” the statement said, adding that the trial was marred by serious and repeated errors. Tarantino’s representatives have been contacted for comment on the filmmaker’s sentencing on Monday.

According to Insider, Tarantino was also convicted of willfully filing false tax returns and conspiracy to defraud the United States. During their three-week trial, Assistant US Attorney Annalise Peters claimed that Todd and Julie “burned” more than $30 million on an extravagant lifestyle funded by loans from banks that they obtained by providing false documents exaggerating their wealth. Peters told the jury that the defendants fabricated documents and lied through the teeth to get what they wanted when they wanted it.

Bruce H. Morris, Todd’s attorney, claimed that the couple’s former employee, Mark Braddock impersonated Todd and committed the fraud behind their back before turning on them in 2012. Peters called Braddock a fraud, but she pointed out that the couple kept on cheating even after they severed ties with him.

What’s the Role of Peter Tarantino, the Chrisleys’ former Accountant in Scam?

There was a sentencing hearing for bank fraud and tax evasion committed by Todd and Julie Chrisley. In addition, Insider reports that Peter Tarantino, the Chrisleys’ former accountant was given a 36-month prison term on Monday. According to the outlet, Tarantino will be reporting to prison on May 1, 2023, after he has recovered from hip surgery. He was convicted in June for his role in the couple’s fraud scheme.

A document obtained by PEOPLE states that the couple’s attorney claimed a witness lied on the stand which resulted in the sentencing being postponed from October 6 to November 21. Documents submitted to the U.S. District Court for the Northern District of Georgia, Atlanta Division in August and shared with PEOPLE reveal that the two filed a joint motion for a new trial on behalf of their clients.

Peter Tarantino was just sentenced to 36 months in prison. You can read it below on Tweet

The government presented and failed to correct false testimony from IRS Revenue Officer Betty Carter. The motion reads who lied about the Chrisleys owing taxes or years when she knew no taxes were due. According to the motion, this testimony had the effect of falsely painting the Chrisleys as untruthful and likely to commit other forms of fraud and evade the tax payments alleged in the indictment.

According to the Atlanta Journal-Constitution, a federal jury found Todd, 53 and Julie, 49, guilty of bank fraud, tax fraud and conspiracy in June. Also guilty of wire fraud was Julie.

The judge released the Chrisleys on bond with location monitoring and home detention conditions, according to court documents obtained by Deadline.

After being convicted of numerous counts of bank fraud and tax evasion, Todd and Julie Chrisley are finally speaking out. I know everyone is curious about what’s happening in our lives, but for the time being, I have to ask that you all respect the fact that we can’t discuss it. As Todd Chrisley predicted in the most recent episode of their podcast, “Chrisley Confessions,” the time will come when they talk about everything.

A little while later he elaborated, saying, “We did want to come on today and let everyone know that it’s a very sad, heartbreaking time for our family right now“. But we continue to believe, and we know that God will do what only he can because he is a God of miracles. Julie Chrisley was found guilty of obstruction of justice and wire fraud and the couple behind the USA Network show Chrisley Knows Best was convicted of multiple tax crimes.

In light of their convictions, on June 23 USA will air the second half of the ninth season of their popular show which was filmed before the trial began. After the verdict, it is unclear if the network will proceed with filming new episodes for the newly ordered tenth season. On October 6, there will be a sentencing. They could spend the next thirty years in jail if found guilty.

These are the latest updates on Todd and Julie Chrisley’s prison.

You can read about these topics also