A successful conclusion to the first season of The Rings of Power. Even though they had to do a lot in the finale—expose Sauron and unveil Gandalf, for example—they still managed to save the elven race by making some gorgeous jewellery.

In addition to their aesthetic value, these rings serve an important function. In reality, they play a significant role in Tolkien canon, but they have a lot to overcome first.

With Sauron’s return and his sights set on Middle-earth, a storm is surely on the horizon, but when will we finally learn the outcomes of the teasers dropped by showrunners, Patrick McKay and JD Payne?

Everything we know so far about Season 2 of The Rings of Power.

The Rings of Power Season 2 Release Date: What time does it Begin?

There is a tremendous sigh of relief among those who enjoy The Rings of Power. The second season of their favourite fantasy show has already been ordered. Even more encouraging is the fact that production has commenced.

Cast and crew members returned to their jobs in early October 2022, which indicates that things are moving forward steadily but may have some time to go before a second season airs.

The first season took 18 months to film, which was likely in part owing to the Covid-19 outbreak, but the high production values certainly contributed as well. That makes sense. The show is visually stunning, and Amazon Studios head Jennifer Salke has stated that the company will not rush the production process.

According to an interview with Variety, Salke said:

“We want the minimum amount of time feasible between seasons, but we also want to maintain a good standard. It will take as long as it takes, but these guys have been writing nonstop over their break because of the seriousness of the situation. Currently, we are in a state of rapid movement.”

Since this is the case, we shouldn’t expect anything until the end of 2023, and if we’re being pragmatic, it won’t happen until spring of 2024 at the earliest.

The Rings of Power Season 2 Cast:  Who Will Return?

#TheRingsOfPower is Amazon’s biggest premiere of all time with 25M worldwide viewers in 24hours. pic.twitter.com/lSbNZQM1pd

The slippery eel that you are, Halbrand. There was widespread speculation that the monarch of the Southlands was actually Sauron in disguise; with this revelation in hand, Charlie Vickers can’t possibly reprise his part. So Adar will be rather busy, and we can also count on the return of Joseph Mawle.

As long as there is life in an elf, we will continue to see Morfydd Clark reprise her role as Galadriel. She has a lot of vengeance to exact on Sauron for using deceit and manipulation to gain her trust.

The Stranger (Daniel Weyman), a.k.a. “The Meteor Man” or, shall we say, freaking GANDALF, was an unforgettable character. It’s obvious that the “wizard” they refer to in the last scene is actually Gandalf the Grey. We’re going to require a lot more work from him.

Since Isildur and his father Elendil play such a major role in the plot as told in the flashback portions of The Lord of the Rings films, it seems likely that Maxim Baldry and Lloyd Owen will return to their respective roles.

As we progress deeper into the Second Age, a lot is on the horizon. When the last alliance of elves and men comes together to fight Sauron, we can anticipate the following return:

The Rings of Power Season 2 Plot

Season two has high hopes for us. To find out more about ‘The Stranger’ and his background, Nori has travelled with him to Rhûn. As if we have no idea.

New fans will be attracted to the series because of what they do. There will eventually be a showdown with Sauron, but in the meantime, renegade daylight Uruk Adar will have his hands full with this adversary.

When we left Mordor, Adar and his orcish friends were celebrating their recent conquest and expulsion of the Southlanders. Now, Sauron has arrived in Mordor, and they will not be able to enjoy their victory for very long. Those who they didn’t mutilate or kill with the unquenchable fires of Mount Doom. When Sauron proposed to Galadriel that he rule Middle-earth, she suggested that he begin with Mordor.

Speaking of Galadriel, the revelation of Halbrand’s true identity has left her in a state of shock. She had put her trust in him, but he ended up taking advantage of her. There is no word to describe how she feels about him now, even if she hated him before.

Without a doubt, she will not relent in her savage quest for Sauron’s blood.

In a last-ditch effort to save the elven race, Galadriel, Elrond, and Celebrimbor fashioned three rings out of the last remaining mithril. According to Tolkien, it takes a long time for one to reach Gandalf. But first, he must discover his own identity.

The Rings of Power Season 2 Trailer

Here you can watch the trailer for The Rings of Power Season 2 trailer: 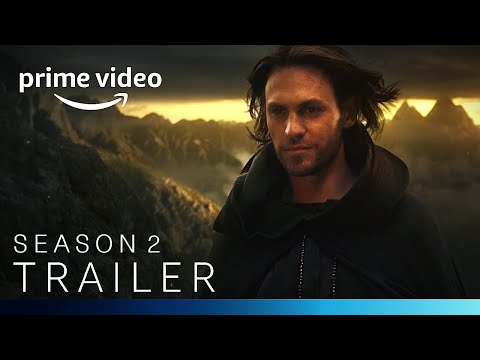 The first season of Lord of the Rings: The Rings of Power is now streaming on Amazon Prime Video in the United Kingdom.

Keep following venturejolt.com for more updates. Don’t forget to bookmark our site for the latest updates relating to tv shows and movies.