How Did Bhad Bhabie Make $20,000,000 Net Worth? Find Out About Personal Life, Relationship, and Others

Danielle Bregoli, who is popular as Bhad Bhabie, is an American songwriter, rapper, and internet personality. She gained popularity in September 2016 with her appearance on Dr. Phil, where she said the term “Cash me outside, how ’bout dah?” and that turned into a viral meme and catchphrase.

Let’s check out more about her in the article below.

What Is the Net Worth of Bhad Bhabie?

According to Celebrity Net Worth, the estimated net worth of Bhad Bhabie is $20 million. The 19-year-old made millions from her music, brand collaborations, and most significantly, from OnlyFans.

According to reports, Danielle is one of the highest-paid celebrities on OnlyFans. She is easily able to earn $300,000 monthly from endorsements and up to $100,000 for just a post.

As per Bregoli, she dates both men and women as well. Previously, she was in a relationship with her former girlfriend for some time.

In a 2020 video that has been uploaded on Bregoli’s social media accounts, she gave life threats to Disney Channel star Skai Jackson. After that, Jackson wanted a restraining order against Danielle, claiming that she threatened her life.

Skai alleges that she is feared to step out of her house by herself and even she didn’t sleep peacefully after she was threatened by Bregoli. Further, she said that she believes Bregoli is “mentally unstable.”

Skai presented the text messages to the judge that she received from Bregoli where Bregoli reportedly told Jackson she sought to fight her. The judge then gave the restraining order, according to which, Bregoli had to stay a minimum of 100 yards away from Jackson, her home, as well as her workplace.

She is also not allowed to reach out to Jackson in any form. Reportedly, the brouhaha is over the rapper named NBA YoungBoy.

As mentioned above, she rose to fame in 2016 with her appearance on the TV show named “Dr. Phil,” in which she said the phrase “Cash Me Ousside Girl” she appeared in the section “I Want To Give Up My Car-Stealing, Knife-Wielding, Twerking 13-Year-Old Daughter Who Tried To Frame Me For a Crime” on “Dr. Phil”.

After that, she gained a lot of followers on her social media in no time and also made an appearance in Kodak Black’s music video titled “Everything 1K’. Bregoli received a nomination for the “Trending” category at the 2017 MTV Movie & TV Awards for her catchphrase.

Bregoli spent time in rehab at a ranch in Utah for troubled teens following her appearance on “Dr. Phil.” Later, she was taken into custody on allegations of grand robbery, possession of marijuana, and even filing a false police report.

She was then found guilty and in July 2017, she was sent for probation of 5 years. Later, she hired a new lawyer and was released from probation the next year.

In 2017, Bregoli made her debut with the single titled “These Heaux” and that single made her the youngest female rapper in history who made it to the Billboard Hot 100 chart. Then, Atlantic Records signed her a record deal.

In fact, she also owns a makeup brand, has a reality show, tours, and a rising career in music. In September 2018, she released her first mixtape titled “15,” in September 2018.  Her second single titled “Hi Bich”, also appeared on the Hot 100 chart.

She has established her name herself by turning in on every opportunity that comes her way. AT the time of writing this article, she has 16.3 million followers on her Instagram handle, 568,000 people follow her on Twitter, and she has 7.4 million subscribers on her YouTube channel.

She earns a huge amount of money from her paid posts and product placements on her Instagram. A few of her initial paid spots were for brands like Fit Tea and Postmates. There are over 12 million viewers on her Fit Tea video.

In July 2019, the announced of her signing a $1 million songwriting/publishing deal with a company named Pulse Music Group. She earns $350,000 upfront with the deal and later she will also receive two other installments of $350,000 following she reaches the set revenue milestones.

It is nearly an advance of $1 million on future royalties. Apart from that, Bregoli will also be entitled to receive 70 percent of profits from future record sales.

Aside from product placements, she also allegedly charges an amount of up to $40,000 for meet and greet sessions, as found by her appearance at the Rolling Loud Music Festival in May 2018 since she was paid $40,000 just to make an appearance at the festival.

In fact, the company owner, who was running the festival had also thrown Bregoli’s 14th birthday party at the venue, and further, she also received a certain percentage from the sales of all of the tickets.

Her representation claims that it costs nearly $30,000 to convince her to appear at an event in the United States and $40,000 for an overseas event. Apparently, she made nearly $1 million from her own 25-city tour.

She signed a deal with Snapchat in December 2018 to make a reality series for the social network. The Snapchat show, “Bringing Up Bhabie,” had 10 million unique viewers in the initial 24 hours and it consisted of twelve episodes.

Danielle made $900,000 in January 2019 to promote a new cosmetics company named CopyCat Beauty for a period of 6 months. Additionally, a percentage of the company’s profits will also be paid to ger.

As per the contract, she would be even allowed to get a large bonus and also the chance to make her own makeup brand if the endorsement performs well.

Just weeks after she turned 18, Bregoli joined the subscription platform OnlyFans in April 2021 and soon, she shared a snap of an earnings report in which it is shown that she earned $1 million within only 6 hours on the platform. Allegedly, the earnings broke the earlier one-day record for OnlyFans which was set by actress Bella Thorne.

In August 2021, during an interview with Variety, she stated that her earnings from OnlyFans alone had made her rich which enabled her to acquire a mansion for which she spent $4 million cash and still have plenty of money to retire forever.

In April 2022, only after a month when it was revealed that Bregoli had acquired a mansion outside of Boca Raton for $6 million, she revealed in an interview with TMZ that she had already earned $50 MILLION from OnlyFans alone after being on the platform for only a year.

Following she received a lot of doubtful feedback about her assertion, she shared the receipts. She uploaded the following OnlyFans earnings statement snap to Instagram on April 25, 2022.

And as we all can see, as per this statement which actually seems to be real, Bregoli earned around $53 million from OnlyFans between April 1, 2021, and April 25, 2022. Following the platform’s cut, she had $42 million as pre-tax net income.

Ultimately, she made $16 million alone from subscriptions, an amount of $25 million from messages, and the rest of $160,000 from tips. Check out the screenshot below: 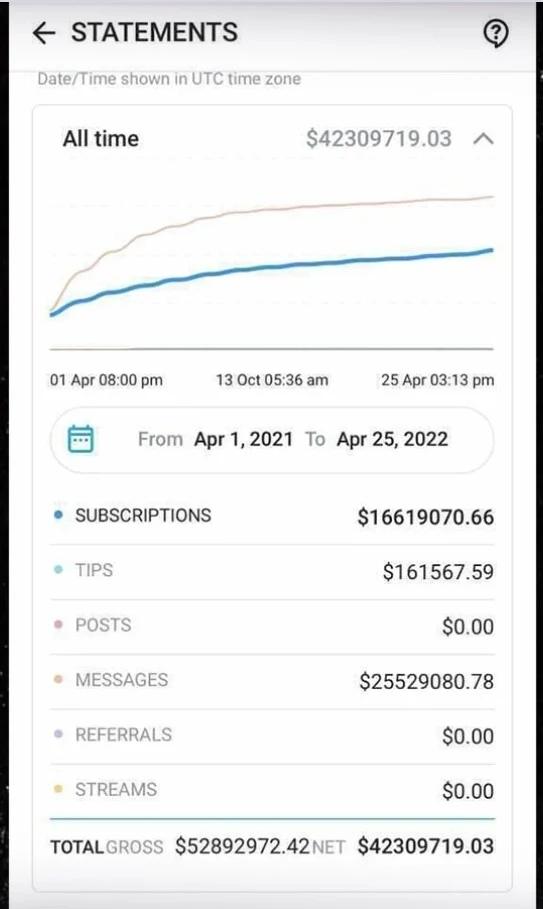 Previous articleUndone Season 3: Are We Getting It or Not? Know Here!
Next articleHow Did Ryan Kaji’ Earn His $32 Million Net Worth?