When is HBO Max Titans Season 4 Episode 5 Going to be Released? We’re already halfway through the season. Over the course of three episodes, a spell involving a beating heart in a box converted Starfire to stone, Lex Luthor to dust and Raven into a powerless human. Nothing here should come as a surprise to anyone who has been following Titans from the beginning.

Strange occurrences are to be expected when working alongside wizards, scientists, aliens, and other out-of-the-ordinary team members. On the other hand, this year’s holiday season has been more unusual than usual. Both of the prophesies involve different Titans.

Koriand’r comes first (Starfire). She was taken to a fantastical realm while she was converted to stone. Kori was greeted by Zadira, a native Tamaran who lived in the area. Kori, she says, is on the cusp of realizing her destiny. It was obviously cryptic. Which forecasts aren’t accurate, exactly? Kori’s future seems promising, and it involves Dick Grayson. While Garfield Logan’s looks more portentous, it is still unclear what it means.

As it turns out, Garfield (Beast Boy) had a vision of the same location where Logan and Raven eventually found themselves. Skulls of various animals hung from the baron tree. That alone was unsettling. Thereafter, Gar recited a prophecy that went something like, “When the red moon is full, the world will follow.” Typically, a sad event will occur in conjunction with a blood moon. Magic is another definition. 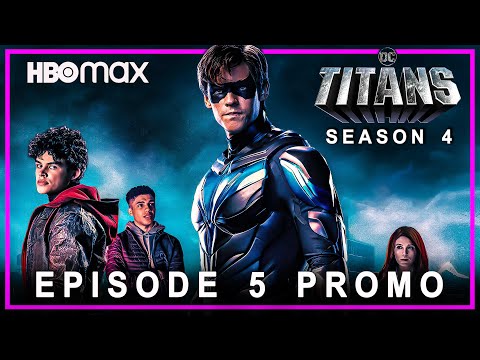 This season seems to be defined by blood. Example: Mother Mayhem has been killing several people with her blood magic. That witchcraft was supposed to be used to get Sebastian Sanger imprisoned; that was part of her master plot.

She hoped that if she could corner him, she could have more influence over him. Conner (Superboy) came to the rescue just in time to prevent Sebastian from uttering the words “Azarath. Metrion. Zinthos.” Even though Sebastian is now on the Titans, that won’t be the case for much longer. By the season’s halfway point, he’ll have likely been initiated into Brother Blood.

When can we Expect to see HBO Max Titans Season 4 Episode 5?

The debut of Titans Season 4 Episode 5: “Inside Man” will air on HBO Max on Thursday, November 24 at 3 am Eastern Standard Time, 2 am Central Standard Time and 12 am Pacific Standard Time. New episodes will be available every week for the following four weeks at the same time and date.

Titans is shaking things up this year by not airing new episodes every week, at least not for the first six episodes (at which point the first half of Doom Patrol Season 4 will air). The second half of the season will be made available online in 2023.

The air times of HBO Max programs are strictly adhered to. If a WarnerMedia streaming service announces that a new show or movie will premiere on a given day and hour, then that is when it will really be available to watch.

In order to protect the person of interest, Sebastian Sanger, the youthful superhero team of Titans has spent all of Season 4 fighting the supernatural Mother Mayhem and her dark cult. The fifth episode of the season, “Inside Man,” marks the finale of this drawn-out game of keep-away by depicting Mayhem’s most cunning plan to date in her pursuit of Sebastian. Despite a few strong character moments, Titans Season 4 is starting to lose steam as it sets up the next act of the tale for its main characters.

Titans reunite in the sanctuary of S.T.A.R. Labs in Metropolis following their terrible battle against Mayhem and her small army of zombies, albeit Conner Kent is still gravely injured. Unfortunately for the Titans, Conner’s injuries go far beyond the superficial, putting them in a defensive position even within their own territory. Without a safe haven, the Titans must devise a strategy for keeping Sebastian away from Mayhem and for healing and liberating one of their own from the cult’s grasp.

Both Conner and Kory Anders confront difficulties, but this episode really shines because of the performances of Joshua Orpin and Anna Diop. In the course of a single minute, Orpin can switch Conner from playing the victim to bring down his comrades’ defenses to playing the devil to possess him. This keeps the rest of the Titans on their toes.

Diop, who too has a tragic prophecy and a superheroic duty, gets to carry on Kory’s approach to these events and how they’re related to the danger Sebastian may pose. There isn’t much in the way of actual story development in “Inside Man,” other than the setup and payoff at the beginning and end.

The episode sees the Titans sitting about waiting for the other shoe to drop, but there are some interesting moments with Ryan Potter’s Gar Logan and Jay Lycurgo’s Tim Drake that feel like legitimately earned, level-up moments for their individual characters. That it’s the first episode of the season to include no truly epic action sequences—just a few little skirmishes here and there—only adds to this impression.

Here we provided you with all details about HBO Max Titans Season 4 Episode 5. I hope you enjoyed our article. Keep following venturejolt.com for more updates. Don’t forget to bookmark our site for the latest tv shows and movies.