“The White Lotus” Season 2 Episode 4: Cameron is resting with Lucia and Mia in bed. The thought occurred to him that his wife would soon be returning to the hotel, and he should make amends for the mistakes he made the night before. Meanwhile, Ethan answers the phone to Harper, who is astonished by her husband’s new habit. Once a morning runner, he had slept in today.

Even though Ethan said the booze was to a fault, he clearly regrets joining in on the mayhem from the night before. Valentina is persistent in her romantic pursuit of Isabella. Dom thinks about his wife and his acts and feels regret. Tanya met Quentin and his pals for the first time. Last night, a bunch of males sat at the table next to her and remained anonymous the entire time.

Tanya’s bond with the gang blossomed out of nowhere. Meanwhile, Portia begins a romantic relationship with Jack, a British man who is also Quentin’s nephew. As Albie observed the two, he realized that there was never any mutual interest between them. As if the mayhem wasn’t already chaotic enough, he and Lucia unexpectedly become friends. Mia makes the choice to launch her singing career by having s*x with the singer at the restaurant.

What Happened at the Last Night?

Cameron tells Ethan to keep the bro code and not tell anyone what happened last night. Harper followed the rules while Ethan broke them by discovering a condom package on the couch. Daphne and Cameron’s infidelity was a topic of discussion, as was Daphne’s lack of female companions due to her own self-doubt.

Now that she knew their marriage wasn’t built on deceit, Harper found the wrapper and tucked it safely away in her purse. Ethan’s trustworthiness was never in question, and her growing sense of hopelessness and annoyance at the world was plain to see. She was amazed at how normally everyone else at the table was acting, and she found it impossible to pay attention to the talk.

At one point, she even expressed a desire to drown herself rather than face the scenario. She repeatedly pressed Ethan for details about the previous evening, but his standard response was that nothing had occurred and that they’d simply been drinking too much. Cameron observed Harper’s unease and pondered whether or not she was in on their little secret.

Harper hid the package in the bathroom before going to bed. The night’s events undoubtedly had an impact on the bond between Ethan and Harper. Ethan and Cameron may be able to save their marriage if he reveals Cameron’s secret. The truth is likely to strain Harper and Daphne’s friendship due to their divergent views on how to handle betrayal. 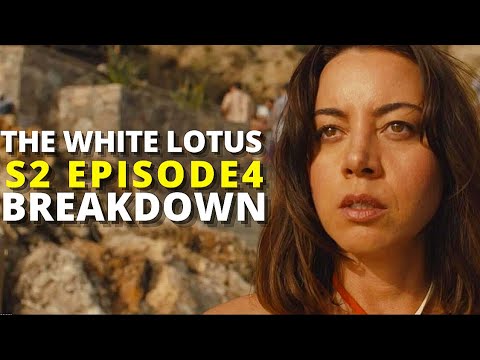 While Ethan may be able to maintain Cameron’s secret, Cameron still owes Lucia money for the evening, so she has no incentive to be discreet. There is no evidence to suggest that Cameron and Ethan have a s*xual relationship, but there is a strong impression that there is s*xual tension between them. It’s clear that season 2 of “The White Lotus” intends for viewers to draw meaning from their friendship.

There are also oblique references to Harper and Cameron’s mutually antagonistic attraction throughout the series. While we can only speculate at this time, we can rest assured that by the end of The White Lotus Season 2 the power dynamics between the two couples will have shifted.

Gay Tanya And Her Pals

Tanya met a bunch of gay men at the exact time she was preoccupied with Greg and her marriage. They gushed over her sense of style and invited her to hang out with them at the beach club. Quentin, originally from the United Kingdom, has been a resident of Palermo for about two years. What happened next thrilled Tanya. Even the two days she had anticipated as being the most boring of her life turned out to be quite pleasant.

She met Quentin’s buddies, a group of primarily gay guys with money and boats and mansions. Tanya appreciated Quentin’s attentiveness as she detailed her harrowing upbringing. Afterward, she and Portia talked about how gay guys made superior companions compared to women. She acknowledges that women have valid causes for their depression but says that homos*xual men may restore their sense of humor. Considering that it was through Tanya’s new acquaintances that Portia was introduced to Jack, she had no grounds for complaining about these people.

During his two months in Sicily, Jack spent most of his time in Palermo, where he went to see his uncle. Jack was overjoyed to meet Portia because, unlike the majority of his uncle’s acquaintances, she was about his age and he could picture himself having a great week hanging out with her. Albie halted there smooching to invite Portia to go swimming with him.

Albie was devastated by Portia’s response, and he eventually joined Bert and Dominic in the dining room. Poor Albie thought Portia. He was a good person, but she couldn’t pretend to be happy for him. Attempting to make Albie envious, Jack kisses Portia at the bar later, but it backfires. After moaning about how miserable her vacation to Sicily was, Portia found the hot Italian romance she had been seeking in a man who had never been to the United States, was not intelligent and was basically the antithesis of everything she had been searching for. You also read about The White Lotus Season 2 Episode 4 release date.

It would appear that everything is coming together nicely for Tanya and Portia, but deep down, there is an underlying sense of unease. Tanya’s meeting with the trio of men on the same day Greg dumped her appeared too convenient to be true.

Did Greg set this up to occupy Tanya’s time? Maybe they’re just curious about Tanya’s financial situation. It appeared like the people in the gathering were of high social standing, but could we really put any stock in their words or appearance? Does the narrative of Isola Bella and its lone matriarch, who was killed by land grabbers in an attempt to seize control of the island, as told by Quentin, have any bearing on Tanya’s future? Well, I guess we’ll have to hang tight and see. Read about The White Lotus Season cast, release date and more.

“The White Lotus” Season 2 Episode 4 Recap: An Explanation of the Finale – How Will Albie and Lucia’s Relationship Impact the De Grassos?

Albie went out to lunch with Bert and Dom after getting turned down by Portia. Dom flaunted the opulent jewelry he had just purchased for his wife. He hoped that by doing this, he may persuade Albie to urge his mom to change her mind about the marriage. When Albie told his father that he couldn’t buy people with money and that gifts couldn’t change people’s opinions, his father was shocked. When he finished eating, he got up and headed back to the shore. Seeing Albie wait for Portia and realizing the meeting did not go as planned, Lucia decided to keep him company.

Lucia feared that following her dream of owning a store might get her in trouble. She knew that one day she would be punished for her s*x employment. Mia fell in love with the opulence of the s*x worker lifestyle while Lucia was reevaluating her own choices. At first shy, she is now full of self-assurance, treating intimacy as if it were nothing more than a commodity.

Lucia found it pleasant to meet Albie because, unlike the majority of men who treated her like an s*x object, he actually seemed to care about her as a person. Bert snickered as he saw Albie with the same girls he’d spotted leaving his son’s room. At the bar, Albie ordered drinks for Mia and Lucia, and when Lucia saw Albie staring at Portia as she made out with Jake, she recommended that they do everything they could to make Albie and Mia jealous.

She gave Albie a kiss, and the two of them afterward made out in Albie’s bedroom. Given Lucia’s history with Albie’s dad Dominic, it’s possible that their friendship will further poison the atmosphere between Dominic and Albie. Dom had hoped to keep his affair a secret, but that now appears hopeless. Dom’s decision to abstain from mischief was met with a return of the difficulties he had avoided. Even though Albie appears to be a kind person overall, their relationship may suffer if he finds out about Lucia’s work. No one in the universe of “The White Lotus” can be relied upon.

Yet Mia recognized a window of opportunity within the mayhem. Now that Giuseppe was gone, she just had to persuade Valentina that she was better than the previous singer at the White Lotus restaurant. In Season 2, Episode 5 of “The White Lotus,” Harper and Ethan will have it out about last night. Since there is no evidence that Ethan has never slept with the two ladies, it will come down to a matter of trust. You can also read about is the cast of The White Lotus Season 2 same or changed?

His marriage may be in danger if Cameron abandons him and Lucia continues to cause issues. The question of whether Harper will transform into Daphne depends on her reaction. Traveling to Sicily together is sure to have a profound effect on Harper and Ethan’s relationship. Also, like Daphne and Cameron, we can anticipate them to seek s*xual favor from other people due to the lack of physical attraction between them.

Thus, the couple who swore they would never act like Daphne and Cameron could have become clones of the famous couple in order to save their marriage. We can’t wait to see how Tanya’s relationship with the guys plays into the plot. Once Albie discovers his father’s secret, there will be an outburst of turmoil.