Goat Simulator 3: Although the original Goat Simulator was released in 2014 and has provided me with many laughs in that time, the length of time I spend playing the game has gradually decreased and now the ridiculous goat game has all but disappeared.

But Goat Simulator 3 explores a new territory where previously no goat had dared to tread. Since there are so many improvements over the first game, it’s understandable that Coffee Stain North didn’t bother with Goat Simulator 2 (apart from trolling the fans).

In Goat Simulator 3, you play as Pilgor, a goat who enjoys scuttling around on its hind legs. You begin your existence in the made-up country of San Angora. If you’ve played the classic Goats on a Plane game you know that the aim is to create as much mayhem as possible.

Goat Simulator 3 has a similar objective to its predecessors, but with a lot more structure and instruction. You’ll also make real headway which will make your misbehavior in San Angora feel much less pointless.

Your motivations manifest themselves as missions and gut feelings. You’ll be well-versed in the game’s Instincts mechanic thanks to your past experience with the series, as they’re responsible for the points you earn for doing ridiculous things like performing countless backflips destroying objects in novel ways and so on as you flit from place to place.

Read about these latest games:

However, quests will have you interacting with the environment and Goat Sim 3’s bizarre cast of NPCs, who provide a level of charm and personality to the game that I never felt in Goat Simulator. The game had such a peculiar hold on me that I completed it in a single sitting (read: eight hours, give or take some destructive excursions that often involved driving badly). Additionally, I intend to coerce my buddies into playing the entire thing again with me.

You’ll meet a Grouchy Grandma elsewhere for Trampling her Garden

She’ll keep hurling balls of yarn at you, grenade-style. She wouldn’t have a chance against Pilgor’s headbutt.

This results in the entrance of Grandma’s cellar, also known as the “Cellar of Death.” You enter to the sound of rock music and a 64-bit visual aesthetic, where you must defeat additional yarn-launching Grandmas in order to acquire a trinket as a reward for your trouble. Obviously a nod to the Doom series, and certainly not the only hidden cultural allusion.

Goat Simulator 3 is chock full of insightful criticism of society. In most cases, it provides a humorous twist on the topic being mocked, and it works well to provide consistent comic relief throughout the game.

Even if you’re just a goat, you can help save the planet, seek the presidency, and protest banana-related human experiments. In Goat Simulator 3, players can transform into wild Abomibananas. Keep an eye out for them (not that it would be hard to, what with a giant banana kicking helpless citizens all over the place). 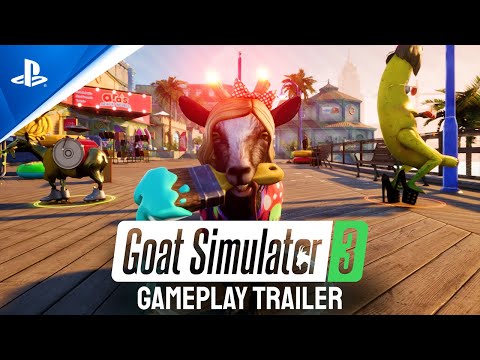 Once you’ve followed your gut and accomplished enough objectives, you’ll rise through the ranks of the Illuminati. Obviously… Under all that thick fur, this goat is actually a reptile. Our Goat Castle serves as a hub in Goat Simulator 3; you’ll find several of them spread out around San Angora, and attuning to them will grant you access to more of the area and a new quick travel location.

These centers have obvious Illuminati ties. Successfully completing a tier unlocks new features for your Goat Castle. It’s not exactly ethical, but I suppose someone has to do it, and in the end, you even get your very own Abomibanana to keep as a pet and experiment.

The currency that may be used to buy new skins in the game is awarded to you for completing objectives and following your gut. You can use your points to purchase a wide variety of different cosmetics and play as a pig, giraffe or Tony Shark (who is, as you might imagine, a shark on a skateboard).

You can also read about these latest games:

You can get so much more imaginative and personal in Goat Simulator 3, but I ultimately had Pilgor jumping around San Angora in bunny slippers with a dish of sushi dangerously poised on their back.

The seven playable minigames range from Hoofball to Prop Hunt, but unfortunately, the online multiplayer component was not available during the testing period. However, there are many methods for a lone adventurer to cause chaos in San Angora.

All it takes is blocking the route of an NPC as they yell something like “I’m walkin’ here!” or “Go eat slugs!” While I think the most fun may be had with many players, I still think Goat Simulator 3 is fantastic on its alone.

Despite the chaotic gameplay, Goat Simulator 3 has rapidly become one of my favorite relaxation games; it even manages to poke fun at Elon Musk at one point, which provided me with a welcome distraction from the current Twitter crisis.

Keep following venturejolt.com for more updates. Don’t forget to bookmark our site for the latest updates on games.