Did you watch the latest 274th episode of Boruto and after watching it Are you waiting for Boruto Episode 275? Here we will update you with the release date and many more updates related to its upcoming episode.

What is the Release Date of Boruto Episode 275?

On Sunday, November 13, 2022, at 5:30 p.m. JST, the 275th episode of Boruto will premiere. The show will premiere on TV TOKYO and other regional Japanese channels first, before being made available to viewers around the world. Crunchyroll, Funimation, Hulu, and VRV all stream the show, so fans can catch the latest episode as soon as it airs.

Guests including Shikatiri Mozu, her son Tsuzura and Murata the Hawk Keeper made their debut in episode 274. Two Leaf shinobi embarked on a quest to find the Thousand Mile Hawk. Finally, Sasuke was able to complete his goal while Mozu cautioned Boruto against interfering with her son.

Watch the Preview of Boruto Episode 275

Till then you can watch the preview of Boruto Episode 275.

You can also read about the Boruto series and its released episodes below.

What Are the Spoilers Related to Episode 275?

It’s going to be a great episode of the Boruto: Naruto Next Generation anime. Back to the Sky is the title of this segment. Tsuzura’s mom brought him along and he sneaked off to see Yuki in private. Not wanting to be in Mozu’s position he has no interest in running the business. He, like Boruto, has the option of going in a different direction.

Maybe Yuki will become the next hawk when Sasuke retires. However, nothing is certain at this point. Because it has bothered him from the outset. Boruto may decide to free the creatures Mozu has imprisoned. For Sarada’s sake, if Sasuke is leaving soon, he might reconsider and come by later.

What Happened in the Boruto Episode 274?

Sasuke’s hawk retired in the episode titled “The Flightless Hawk” prompting him and his student Boruto to go in search of the Thousand Mile Hawk. The unique hawks of this species may travel over a thousand kilometers nonstop. They zeroed in on a man named Maruta who was rumored to be the hawk-keeper.

Below You can watch episode 274 of Boruto 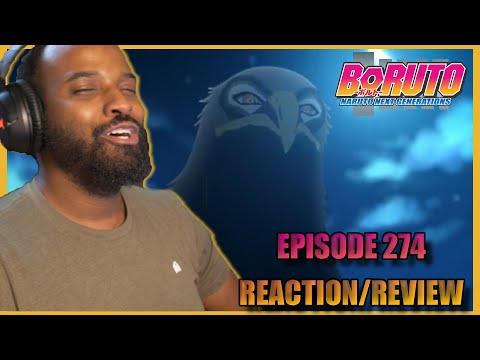 While they track down the individual they discover a black market trade is taking place nearby. The merciless trader Shikatiri Mozu is introduced in Episode 274. Mozu captures exotic animals and sells them to A-listers, multi-national corporations and the like. Later, Boruto befriended Mozu’s son Tsuzura and the two worked together to hunt with Tsuzura’s white hawk, Yuki.

Let’s have a look at the reviews of episode 274 of Boruto.

What Are the Reviews on Boruto Episode 274? 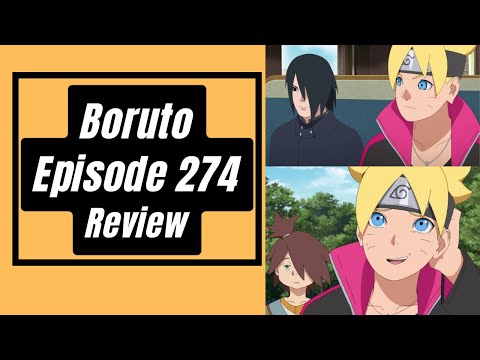 Sasuke and Boruto leave the village in episode 274 of Boruto: Naruto Next Generations to catch a hawk. Sasuke’s messenger bird is retiring and as Sakura reveals to Sarada. Sasuke must find a new one. Therefore, he has decided to go after a mythical Senri Hawk.

The fact that Sasuke has no idea where to get a Senri Hawk is unfortunately one of the obstacles to obtaining one. But he’s acquainted with a guy named Maruta who does. Instead of looking for a Senri Hawk, he and Boruto went in quest of Maruta.

They pass through Rakuen a huge exotic animal store on the way. Rakuen’s proprietor, Mozu Shitakiri, is a woman on the hunt for a Senri Hawk to resell. Since setting up shop close to the Senri Hawks’ territory, Mozu has been pestering Maruta to show her the way.

Absolutely correct Sasuke’s story arc involving a new hawk is in reality a lesson on animal welfare. To be as hip as Sasuke be sure to only purchase pets from reputable vendors. However, Sasuke does not give a hoot about endangered species therefore he will likely get one as a pet.

My guess is that Yuki will continue to be Tsuzura’s companion even after she is set free. Once Rakuen collapses perhaps Tsuzura and Yuki will also join Maruta. By the time the arc concludes Rakuen will have surely gone out of business. Boruto has no plans to abandon the village. You can also read about How and Where to watch Naruto Shippuden in 2022 for free.

We never learned the name of the messenger hawk he was supposed to replace but we do know the name of another of his hawks. Sasuke has made a summoning deal with the gigantic hawk Garuda.

Sasuke has more in common with hawks than snakes which is something you might not know. Garuda is the only big hawk he has ever called upon. Therefore this can be a source of some consternation. In the meantime, we’ve witnessed him call forth three enormous snakes: a white one that goes by the name unnamed Manda and Aoda.

However, Orochimaru’s true summon animal is a snake. Sasuke as Orichimaru’s disciple has a summoning pact with them. But beyond that, he doesn’t feel much of a connection to them. The enormous snakes are often used as meat shields by him.

For those unfamiliar with Boruto Naruto, Next Generations is a Japanese manga series written by Ukyo Kodachi and Masashi Kishimoto and illustrated by Mikio Ikemoto. First serialized in Shueisha’s Shonen manga magazine Weekly Shonen Jump beginning in May 2016 with Kodachi at the helm and Kishimoto as editorial supervisor.

The series was moved to Shueisha’s V Jump magazine beginning in July 2019. Kodachi left the series in November 2020 and Kishimoto took up writing duties at that time. The adventures of Boruto Uzumaki son of Naruto Uzumaki and his ninja squad are chronicled in Boruto, a spin-off and sequel to Kishimoto’s Naruto.

The idea for Boruto came from a pitch that Shueisha made to Kishimoto for a sequel to Naruto. Despite this, Kishimoto suggested his former assistant Mikio Ikemoto illustrate it instead and the film’s narrative was written by Ukyo Kodachi who also wrote Boruto: Naruto the Movie.

Manga is a joint effort between Kodachi and Ikemoto. In April of 2017, TV Tokyo began showing an anime adaptation of the show. The anime starts before Boruto and his pals become ninjas in a later story arc but the manga began as a retelling of the Boruto film. There is also a series of light novels.

You can also read about these animated series

Praise was also given to the anime prequel to Pierrot for its use of both new and returning characters although the story of the manga was considered more serious because it focused more on the protagonist. One million copies of the manga series have been distributed by Shueisha as of January 2017.

How Many Episodes Will Boruto Have?

We can’t be sure about that how many episodes of Boruto will release. But we can be expected there will be episodes 209-260.

In Which Episode Was Boruto Crying?

In the 201st episode titled “Empty Tears”, Boruto was crying.

Now that we know that Boruto is expected to run for around 30 volumes and that its publishing tempo is roughly 2.5 volumes per year. We can calculate that Boruto will be running for roughly 12 years which adds up to what we have said above that Boruto is probably going to end around 2028.

Are you excited about Boruto episode 275? Must Share your answer with us in the comments section below. For more updates and details stay tuned with us. Must visit our website venturejolt.com.