During the Halloween concert, Harry Styles Cosplay Danny Zuko and performed amazingly. Everyone was surprised by his look.  When the glam-pop singer performs a one-off Halloween concert every year in what the British call “fancy dress,” the occasion becomes known as “Harryween” among his legions of devoted followers.

This year, Harryween/Halloween fell smack in the middle of Styles’ massive 15-show residency at Los Angeles’ Fabulous Forum, making it his first-ever West Coast Harryween show. On Monday, he addressed the 18,000-strong crowd of costumed revellers, telling them, “Please feel free to be whoever you want to be tonight.”

A lot of the people there were trying to channel their inner Harry Styles. Cosplayers of Harry Styles filled the sold-out Forum on Monday, with some fans donning vintage Fine Line era outfits like fuchsia blouses and wide-legged white sailor pants, others channelling Styles’ Coachella 2022 look with sequined rainbow stripes and still, others sporting green feather boas from the 2021 Grammys.

Others took a satirical approach, dressing up as references to Styles’ previous Halloween outfits, such as the Elton John-inspired rhinestone-studded Dodger jersey he wore in 2018 or the Dorothy from the Wizard of Oz gingham dress he wore at last year’s Harryween event at Madison Square Garden. Let’s just say the entire audience went into a panic on Monday when Harry’s House singer Harry Styles asked, “Did you dress up for Halloween?” in the song “Little Freak.”

But the real question was what would Styles wear. And he did not let down his passionate audience one bit: Grease was the word. His bandmates walked out to “You’re the One That I Want,” dressed as characters from the high school musical.

There was Rizzo and Marty Maraschino in pink slacks and matching satin jackets from the Pink Ladies, Frenchie from the era of “Beauty School Dropout” with a pyramid of hot rollers on her head. Then the one everyone was waiting for Styles himself walked out dressed as Danny Zuko and proudly waved his hands.

Dressed in a black leather biker jacket, black “Harryween” muscle tee black bobby socks and a shoe-polish-black pompadour wig, Styles was serving Travolta realness while also channelling ’68 Comeback-era Elvis (the Forum’s in-the-round staging added to that effect) and even a bit of androgyny à la the sideburned Annie Lennox at the 1984 Grammys.

Several humorous moments occurred during the Harryween concert, such as when Styles joked with a female fan who said she had resigned from her job to see the concert or when he responded sarcastically to a male fan’s homemade placard reading “Daddy?” with “Yes.”

However, there were also tender moments, such as when he draped a rainbow flag over three little girls in the front row as they sobbed happily (they had held a placard begging for his help). Fans were already shivering as Harry Styles sang “Hopelessly Devoted to You” from Grease while images of the late Olivia Newton-John played on the television boards at the Forum.

Singing songwriter and multi-instrumentalist Ben Harper opened the event, as he had for all 15 nights of Styles’ “Love on Tour” L.A. residency. Harper may have been intimidated by the young and likely inexperienced audience.

Harper Performed to a Sold-Out crowd, Unlike Typical Arena Openers

But Harper, who played the crimson piano in a bejewelled N*die suit nearly alone, commanded the quiet and reverent attention of the crowd with some frightening, Phantom of the Opera/Paradise-like chamber-music drama.

High spots were a duet with his daughter Harris (with son C.J. on keys) on one of Harris’s originals, as well as the painful and passionate slowcore of “Maybe I Can’t” and a sensuous cover of Marvin Gaye’s “S*xual Healing” that many in the youthful crowd shockingly seemed to understand.

Of course, the biggest cheers went up for “Boyfriends,” a song that had been “loaned” to Harper by Styles. Harper, who played acoustic, electric and slide guitar on that Harry’s House ballad once joked, “I’d like to dedicate this to the s*xiest man in rock — me! “, referring to the record as “one of the best records I’ve ever had the luxury of being on.”

Harry Styles, you’re the runner-up for se*iest. Obviously, I’m joking, but in my opinion, he’s the best. Not unexpectedly, the remark was met with applause.

With Harper as his opener, Harry Styles’s run at the Forum will continue on November 2, 4, 5, 7, 9, 11, 12, 14 and 15. Those evenings will still be cause for celebration even if Styles will put aside his Zuko leathers and Harper will retire her rhinestones. It’s always Harryween in Styles’s reality. 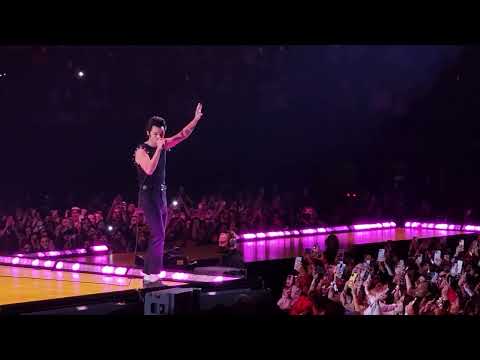 Here you read details about Harry Styles’s Cosplay of Danny Zuko at the latest concert. Keep following venturejolt.com for more updates. Don’t forget to bookmark our site for the latest updates on celebrity news.