Aaron Rodgers is well renowned for both his NFL career and his long series of high-profile romances. The athlete’s relationship with many women everyone wants to know about Aaron Rodgers’s Dating history,  Shailene Woodley, an actress, was verified by Us Weekly in February 2021, just before the quarterback announced he was engaged.

He said when “I got engaged and had some of my best games ever in football. I want to start by expressing my gratitude to my teammates for their help, inspiration, safety, and outstanding performance on the field. I’ve got a terrific bunch of people that help me off the field, so I’d like to thank my team. 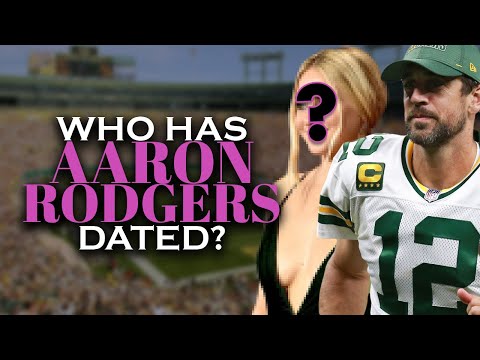 Rodgers and “Gossip Girl” star Jessica Szohr were briefly linked in 2011. The couple ended their relationship, but in the beginning of 2014, they tried again.

“They broke up because her schedule was chaotic for a spell, and they just couldn’t be together in that situation, but now they have been spending their downtime together and things feel fine. They immediately got involved again, a source at the time told Us Weekly.

Rodgers and Olivia Munn started dating in the spring of 2014 after their breakup with Szohr. Having dated actor Joel Kinnaman in the past, Munn has been upfront about her relationship with Rodgers, including their sex practises on game days.

In response to the scandal surrounding Rodgers’ tense connection with his family after their 2017 separation, Munn spoke up .According to Munn in an interview with SiriusXM’s “Radio Andy” from 2018, “I was friendly with Jordan [Rodgers] and I only met the parents a couple of times.”

She said, “For about eight months before we started dating, he hadn’t spoken to the parents and one brother. Rodgers should talk to his family, Munn claimed, and she encouraged him to do so .In the spring of 2014, after their breakup with Szohr, Rodgers started dating the actress Olivia Munn.

In the 2018 interview, Munn stated, “They had a really wonderful talk, and then they started coming out my first year in Green Bay in 2014.” I simply pushed for family reconciliation because I believe it to be so vital.

Rodgers and Sports Illustrated Swimsuit model Kelly Rohrbach were seen playing golf together in the spring of 2017.According to TMZ, the two were seen on camera at the Los Angeles Westchester Golf Course.

In the beginning of 2018, Rodgers and Danica Patrick’s romance intensified.The pair documented their trips and romantic nights together over the course of their two-year romance. Even a $28 million Malibu mansion was bought by them in 2019. But by the summer of 2020, a representative for the former Indy Car racer told Page Six that the couple had split.

In September 2020, Rodgers, who extended his Green Bay contract for a further four years at a cost of $134 million, declared that he had developed a “new and greater passion of life.”

In an interview with SiriusXM’s “Pat McAfee Show,” Rodgers said, “I’ve made choices, changed some habits, and put myself in a much better head space. There are just a lot of things that have come together in my life over the last few months that have really been enjoyable and reminded me, given me perspective, on life and in football to view things through the most positive lens I possibly can.

In February 2021, rumours of a relationship between Rodgers and Shailene Woodley surfaced. Then, a few days later, Rodgers made an engagement announcement that shocked both the sports and entertainment industries. The football player acknowledged his fiancee when receiving the Most Valuable Player award at the NFL Honors, however he did not identify her by name.

Days later, the star of “Big Little Lies” confirmed the report, acknowledging that she and Rodgers had been engaged “for a long” before anyone knew. The couple decided to put off the wedding and separate in February 2022, nearly precisely one year after Rodgers announced their engagement.

The rumour of Aaron’s new girl has generated discussion ever since it appeared on social media. Charlotte Blu, or Earth allege that they are witches. Her original name was modified. Charlotte Brereton is now identifying as a medicine woman.

She has a bachelor’s in broadcast communication, but she has never taken a magazine course. Her interest in psychedelic drugs is also suggested by several press reports. Her date of birth doesn’t have enough information. She does, however, purportedly look to be in her 30s.

Aaron Rodgers has maintained his notoriety this year even during the summer. This time, the lovers have been intrigued by his purported love life.After splitting up with Shailene Woodley, he is said to have found a special partner. However, she refutes the strange rumours that are being made about her.

This year has been extremely unpredictable for Aaron Rodgers’ employment and emotional growth. The current MVP of the NFL has returned to his starting point.

He gives the Green Bay Packers his professional fortune for the ensuing few years. The Lombardi Trophy will still be returned to Green Bay, Wisconsin, even though he doesn’t have any familiar faces on his register.

During the NFL Honors ceremony, Rodgers announced the information. During the live-streamed event, the NFL quarterback was presented with the 2020 AP Most Valuable Player award. According to Rodgers, “2020 was unquestionably a crazy year packed with tonnes of change, growth, some fantastic, memorable moments.

The value of Aaron Rodgers

American football player Aaron Rodgers has a $200 million fortune and is a talented player. For the Green Bay Packers, he simulates a quarterback. His earnings and approvals from June 2018 to June 2019 totaled $90 million. Aaron signed a contract with the Packers in March 2022, guaranteeing them $153 million over four years while paying him $50 million annually.