A new picture for Komi Can’t Communicate’s planned the second season has been released, as well as a release date for the series, which is slated to return on April 6, 2022.

The announcement comes via the anime’s official Twitter account, with the new graphic depicting Komi and her pals and some new characters revealed in the picture’s background imagery. Below is a new graphic from the second season:

Along with the visual and release date, a new cast member was announced: Shinichiro Kamio will join the cast as Makoto Katai’s voice. With the official Japanese broadcast launch officially confirmed, viewers won’t have to wait long to catch up on the hit anime’s newest season.

Komi Can’t Communicate’s first season began on October 6, 2021, and was made accessible in a weekly version outside of Japan later that month. 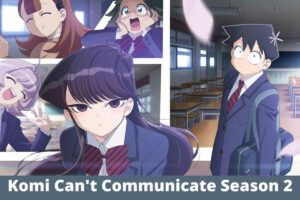 “Timid Tadano is a complete wallflower, which is exactly how he wants it,” according to Viz Media’s official description of the series. “However, everything changes when he finds himself alone in a classroom with the famed Komi on the first day of high school.

He immediately understands she is not being aloof—she is quite awkward. Now he’s made it his mission to assist her in achieving her goal of making 100 friends!” Tomohito Oda’s manga debuted in May 2016 and rapidly became a hit in Japan.