The 1990s were an exciting decade for horror. Apart from masterpieces such as Candyman and Scream, the genre was dominated by young slashers attempting to emulate Scream’s success.

However, one of the post-Scream era horror films that broke the genre template was Andrew Fleming’s 1996 picture The Craft.

Now, on the 25th anniversary of the film, you can recast your devotion to witchcraft, as The Craft will finally arrive on 4K Blu-ray on May 17, 2022, courtesy of Shout Factory.

In the film that ensued, Sarah, played by Robin Tunney, is your typical high school freshman who immediately makes friends with a group of outcasts.

They gradually learn that their combined efforts have resulted in Witch-like abilities. What begins as pure pleasure in obtaining what they desire and subjugating lads to their whims quickly morphs into a more terrible, uncontrollable darkness. 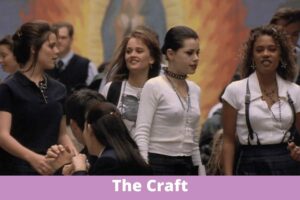 While this film begins as a standard high school coming of age story, especially for the 1990s, the gloomy atmosphere, incredibly dark undertones, quirky energy, and extremely enjoyable cast elevated this horror thriller to cult status in the eyes of many genre enthusiasts.

The Craft features an all-star cast led by Tunney, Fairuza Balk (The Waterboy), Neve Campbell (Scream, Wild Things), Rachel True, and Skeet Ulrich (Scream, Riverdale), who all appeared to be enjoying the time of their lives on set, from the twisted writing to the terrible imagery.

Shout! Factory’s new Scream Factory edition includes a fresh 4K restoration from Sony Pictures on Blu-ray and 4K Blu-ray, as well as all previously released additional features from the boutique label’s original Blu-ray release of the film in 2019.

The box art for the reissue is a reproduction of the original film’s poster, which features Tunney, Balk, Campbell, and True striding ominously in the pouring rain, surrounded by lightning.

Scream Factory albums are typically double-sided, so it’ll be fascinating to see if the label opts for the alternate artwork from the previous release or creates an altogether new design.

Also check: What time will ‘Jeen-Yuhs Act 3, ‘Awakening,’ be available on Netflix?

This new 4K edition will cost $36.98, and pre-orders made through Scream Factory’s website will include a special poster of the film’s original theatrical artwork.

The Craft is a truly distinctive picture, even by contemporary standards, owing to its gloomy subject and emphasis on witches. Its final act, in particular, gets to some dark places.

This type of picture would go direct to video today, and due to its cult following, it eventually received a direct-to-video sequel in 2020, The Craft: Legacy. The less said about that film, though, the better.

Scream Factory has released several 4K restorations of Horror classics, including Halloween, They Live, and The Howling.

The Craft is the next addition to Scream Factory’s expansive genre collection, and it will be released in 4K on May 17, 2022. You can pre-order the film on Scream Factory’s website, where you can also peruse the picture’s extensive list of wonderful additional features.

If you haven’t seen The Craft yet, here is the original trailer: