The victories serve as evidence of the show’s unexpected success since its summer premiere. Hacks is a comedy series created by Paul W. Downs, Lucia Aniello, and Jen Statsky.

It follows Smart’s Vance, a comic legend and Las Vegas fixture, as she mentors and battles with a new protégé and young writer, Ava (Hannah Einbinder).

Following a ten-episode premiere season, day-one viewers and newcomers are ready for a treat: there will be more Hacks. Here is what we currently know. 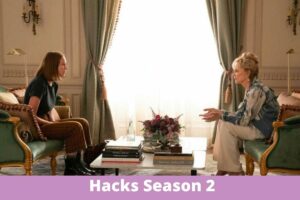 Is Hacks Renewed For Season 2?

Yes. HBO revealed the announcement in June 2021, just days before the season 1 finale of Hacks was scheduled to premiere.

“We have been overwhelmed by the fantastic response to Hacks—we owe this renewal to each, and every individual who tuned in and then recommended it to a friend,” Downs, Aniello, and Statsky said in a joint statement.

“I am overjoyed that we have been renewed for a second season, and I told Hannah, ‘No more Miss Nice Guy; it’s Bette and Joan from now on!’ And who is BETTE??!!'” At the time, Smart was added.

When will it make its debut?

That remains an open question. In a June 2021 interview with The Wrap, Aniello confirmed that the script has not yet been written.

“We’re ecstatic that we get to continue telling the narrative, even if the first chapter is complete. “We have a lot more planned,” she explained. To put things in perspective, Hacks season 1 debuted on May 13, 2021.

What will the subject be?

Although plot elements are still being worked out, the show’s creators did express some thoughts at the ATX Television Festival.

“I believe that eventually, while the details are unknown, what we set out to do in this story was to set Ava, Deborah, and everyone else in their ecosystem on a path toward atonement and emotional happiness,” Down told Deadline. “I believe we should continue down that route.

As seen in the show, it is frequently one stride forward and two steps back, but that is where the fun and games are.”

“I suppose I want [Ava and Deborah] to take on the world,” Einbinder continued. If there is any form of destructive force, I want them to fight alongside the forces of good,” the actress stated.

“I want [Ava] to develop, and I want her to do whatever Paul, Jen, and Lucia want her to do—and I’m going to be there to help her do it, baby.”