Suzanne Martin wrote, and executive produced Hungry, which follows a group of friends who belong to a food-issues support group as they search for love, success, and the perfect thing in the refrigerator to make it all better. 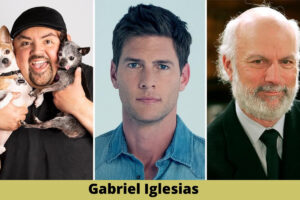 Danny, a large-hearted huge guy who is the party’s life, Iglesias will play. McPartlin will represent the group’s leader, Justin.

NBC Pilots and Series Orders for 2022

Iglesias also featured in and executive produced the Netflix comedy, Mr. Iglesias. He’ll make history on May 7 when he becomes the first comic to perform at Dodger Stadium, which will later be streamed as a Netflix stand-up special.

Iglesias also stars in Paramount’s upcoming animated film Blazing Samurai, which will be released in July and in which he will voice Chuck. CAA, Arsonhouse Entertainment, and Hirsch Wallerstein Hayum represent him.

McPartlin is best known for his series regular role on NBC’s Chuck. He also appeared in two seasons of Fox’s L.A.’s Finest and Marc Cherry’s Devious Maids, with whom he reteamed for a role on Why Women Kill.

Hunter Killer and the latest Hallmark Movies & Mysteries film Cut, Color, Murder are his film credits. He also worked as executive producer for the latter. He is represented by Mosaic, Gersh, and McKuin Frankel Whitehead attorneys.

Burrows, most known for his work on Taxi, Cheers, Frasier, and Will & Grace (including the latter’s revival), has earned 11 Primetime Emmy Awards throughout his lengthy career.

He directed pilots for all four of the programs mentioned above and long-running comedies such as The Big Bang Theory and Two and a Half Men.

His most recent Emmy nomination came in 2020 for Live in Front of a Studio Audience: ‘All in the Family’ and ‘Good Times,’ both of which he executive produced.

For numerous decades, he has been the dean of multi-camera comedy directing, winning multiple DGA Awards, the most recent in 2020 for Live in Front of a Studio Audience: Norman Lear’s ‘All in the Family’ and ‘The Jeffersons.’