Please continue reading to learn everything we know about the Surface Laptop 5, including its design, specifications, expected release date, and estimated price.

Microsoft has not yet made an official announcement on the Surface Laptop 5’s release date. 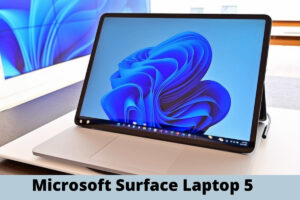 It makes predicting the exact launch date of the new laptop impossible since the product might return to its annual October release schedule or undergo another two-year hiatus and arrive in 2023.

According to Windows Central, the laptop will arrive in the second half of 2022.

We also don’t know the price of the Microsoft Surface Laptop 5, but we’d anticipate it to be comparable to earlier models in the lineup.

Must read: Riverdale and Supergirl Alums Join Tom Swift’s Ensemble in a Novel Based on Nancy Drew’s Life

At the moment, we haven’t witnessed a flood of Surface Laptop 5 leaks. While Windows Central reports that Intel 12th Gen and AMD Ryzen 6000 series processors will be available, most information comes from a leaked spec sheet discovered on Windows Prime.

The specification list is identical to those on Microsoft’s website – teases a “new enhanced design with PixelSense Flow 120Hz display.”

Both panels will feature a 3:2 aspect ratio, a 1500:1 contrast ratio, and support for Dolby Vision. Both will also support the Surface Pen and touch.

According to the source, the laptops will be powered by Intel Core processors from the 12th generation (i5 or i7 for the 13.5-inch, and i7 for the 15-inch).

Of course, all of these specs are based on a single leak, so it’s prudent to be skeptical for the time being. Nonetheless, everything appears possible, with Microsoft expected to upgrade its laptop to the next chip generation.

For years, the Surface Laptop range has cried out for a design overhaul, with the bezel surrounding the screen becoming increasingly bulky and out of date.

Fortunately, the recent leak reveals that the Microsoft Surface Laptop 5 will include an ‘enhanced design.’ It does not specify what the ‘enhanced’ design would include, but we’re guessing it involves a slimmer screen bezel.

According to reports, the new laptop will include a 1080p Windows Hello camera, dual Studio Mics, and quad Omnisonic Dolby Atmos, compatible speakers. It will be available in four colors: Platinum, Ice Blue, Matte Black, and Sandstone.

Two USB-C ports, one USB-A port, a 35mm headphone jack, and a Surface Connect port are included. The Surface Laptop 5 appears to be the first device in the range to feature Thunderbolt, which enables quicker data transfers and additional functionality such as output to an external monitor.

Apart from the spec sheet, there’s not much else on the Windows Prime website, so it’s worth taking much of the above with a pinch of salt until we get more details. Maintain a bookmark for this page to receive new versions on the Microsoft Surface Laptop 5.