Before the release of Jurassic World Dominion, the globe-trotting conclusion to the new Jurassic Park trilogy, LEGO offers lovers of all things dinosaur the opportunity to add seven new construction sets to their collection.

And, since LEGO understands who the show’s real stars are, the new sets contain the most diverse collection of dinosaurs ever exhibited in brick form.

Additionally, since some of the new pieces are inspired by sequences from Dominion, the new LEGO collection sheds light on what to expect from the highly anticipated sequel.

To begin, a new 27-piece LEGO DUPLO set recreates a “Dinosaur Nursery” replete with three adorable baby dinosaurs. The 91-piece “Jurassic World Pteranodon Chase” set hints at how Owen would have to withstand an assault by the flying dinosaur in the next sequel. The 140-minute “Jurassic World T.

Rex Dinosaur Breakout” also previews a scene from Dominion in which a ferocious T. Rex wreaks havoc on a helipad. A fourth set, consisting of 167 pieces, suggests a bike pursuit with an Atrociraptor, a variant of the standard Velociraptor that Dominion will bring. 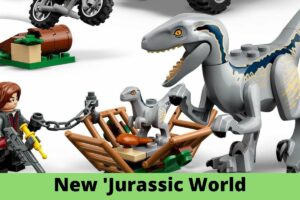 Finally, the 461-piece “Jurassic World T. rex & Atrociraptor Dinosaur Breakout” set previews a fatal confrontation between the Dominion’s new raptors and the T-Rex, the king of the dinosaurs.

After the last Jurassic World film, Fallen Kingdom, Dinosaurs were released into the wild. Dominion, the sequel, is set four years after that fatal incident and will demonstrate how humans have evolved to coexist with dinosaurs.

The film’s debut trailer hinted that the scaly animals are threatening to exterminate humanity, and Owen and his team of dinosaur enthusiasts will tour the planet in search of a means to safeguard the survival of all species. Dominion also reunites several cast members from Jurassic Park, including Sam Neill as Alan Grant, Dern, and Goldblum.

Trevorrow, who co-wrote the original two Jurassic World films and directed Jurassic World: the Fallen Kingdom, returns to lead Dominion and put the trilogy to a close. Trevorrow returns as co-writer with Emily Carmichael for the threequel, which stars Pratt, Dallas Howard, Daniella Pineda, and Justice Smith.

Toddlers with an affinity for animals may help Claire Dearing care for three young dinosaurs inspired by Jurassic World. This set has a Triceratops in a cave, a Pteranodon in a nest, and a Brachiosaurus nibbling leaves off a tree with its long neck. While your little learner interacts with the lovely dinosaurs in their forest homes, they will also improve their fine motor skills and emotional intelligence.

Must check: In the Genshin Impact V2.5 Update, What’s New?

Based on the new Jurassic World Dominion film, this incredible set has everything necessary for an action-packed play. It contains a brick-built dock, fish stand, buggy, and Owen Grady and Maisie minifigures equipped with fishing rods and lassos. Let the pursuit begin!

Based on the next Jurassic World Dominion film, this playset will provide hours of exciting dinosaur adventure. Construct an airport complete with a helipad, a helicopter, and a barrier large enough for the huge T. rex to pass through. Additionally, the kit contains Minifigures of Owen Grady, Zia Rodriguez, and a wildlife guard, as well as a dinosaur egg, walkie-talkie, and tranquilizer, allowing you to create your fascinating tales.

Prepare yourself for action-packed play with this fantastic set based on the forthcoming Jurassic World Dominion film. It has a market with a wall for the vicious Atrociraptor and a cool motorbike to break through, a combat pit for two miniature dinosaur figures, as well as mini figures of Owen Grady and Rainn Delacourt.

Take a look at this incredible playset, inspired by the next Jurassic World Dominion film. It includes minifigures of Maisie and Rainn Delacourt, dinosaurs Blue and Beta, a vehicle, a bike, and a dinosaur cage equipped with a trap, as well as a chicken drumstick for use as dinosaur bait. Therefore, begin developing and then acting out your great action-adventure scenarios.

This amazing playset reenacts the massive action from the next Jurassic World Dominion film. It features a nice aircraft with seating for Owen Grady, Claire Dearing, and Kayla Watts in the cockpit. Additionally, the aircraft has whirling propellers, an open cargo hold, and engines engineered to disintegrate in the event of a Quetzalcoatlus assault. Are you prepared to take flight?

Prepare for dinosaur drama with this Jurassic World Dominion-inspired playset. Construct a market with a T. rex exhibit and a big rig vehicle equipped with a cage to carry the Atrociraptor. Then create your thrilling tales with Minifigures Owen Grady, Claire Dearing, Rainn Delacourt, and Soyona Santos, as well as two tranquilizers to quiet those dinosaurs!

Jurassic World Dominion will be released in cinemas on June 10, 2022.