When developer MiHoYo introduced Genshin Impact in 2020, they anticipated success in China, Southeast Asia, Korea, and other East core regions.

However, the game exceeded all expectations, and the Chinese free-to-play mobile game quickly gained the attention of over 10 million users. Additionally, MiHoYo became a household brand in China in a matter of months, with the developer raking in an estimated $175 million in monthly income.

The Success Formula Used by MiHoYo Can Be Replicated

Despite its origins in mobile gaming, MiHoYo was instrumental in Genshin’s success on PC. With a likable cast and a budget to match the stunning anime-style aesthetics, you might easily be excused for assuming the game was developed by a AAA company. 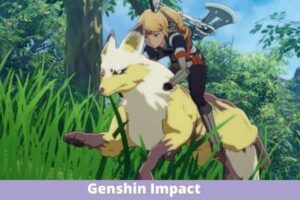 MiHoYo’s three founders, Cai Haoyu, Liu Wei, and Luo Yuhao, created the firm because of their shared passion for anime. Their vision has aided in catering to lovers of open-world RPGs worldwide.

However, Genshin Impact is fundamentally a casual game that you can get into, play for a bit, and then log out. The Resin system prevents you from engaging in certain behaviors and earning prizes associated with them.

You get 160 Resin for free, and after you run out, you will be unable to collect treasure for leveling up your characters or weapons. While you may enjoy battle, exploration, narrative objectives, and events without limitation, this is not a game that can be played for hours on end.

However, one game that can address the issue of time-limited material while still fulfilling all of Genshin’s requirements is Blue Protocol. Bandai Namco’s upcoming free-to-play massively multiplayer online role-playing game may be the next big thing for anime lovers and die-hard MMORPG fanatics.

Despite the impending Japanese release, Bandai Namco has also guaranteed a Western release in the future.

Smilegate, a Korean developer, said that it had concluded negotiations to distribute Blue Protocol in Korea. Taiwan, Hong Kong, and Macau are also confirmed for the game. However, there is no official release date, and Bandai Namco has chosen to keep the project under wraps for the time being.

With anime establishing itself as a cultural phenomenon, the market for anime-style games is booming. However, most of the titles we’ve acquired throughout the years have been earned.

From Persona 5 to Code: Vein, accessibility to anime RPGs has become a problem for gamers who cannot afford to spend $60 for a single game upfront.

Blue Protocol aims to provide a completely free-to-play experience, which is one of the things that catapulted Genshin to prominence. Genshin Impact’s “gacha” element is a characteristic that many in the gaming community despise. Obtaining characters in Genshin Impact is the same as obtaining treasure boxes.

Bandai Namco’s next project, a full-fledged MMO, will be entirely commercialized through a battle pass system and limited commodities. This paradigm is much more accessible for players who want to contribute to the game while not feeling that their advancement depends on chance.

Must check: Big Little Lies Season 3 Could Be Out in 2022, and It Could Be Renewed or Confirmed.

The creators have stated that there would be no monthly membership fee at launch, which is one of the reasons why some players may be hesitant to attempt an MMORPG for the first time.

Interestingly, Blue Protocol will first focus on PVE with no intentions for PVP. It is a squandered chance, although Bandai Namco may add it to the MMO in the future.

Being unable to test your builds against other players or experiment with new characters is a lot of fun, and it is one of the most endearing features of other MMOs, such as World of Warcraft.

Blue Protocol had its first closed alpha in 2019, and the gameplay seemed to be quite stable. Certain activities enable users to create teams and explore dungeons, arenas, and the open world.

You’ll encounter a variety of components and weapon kinds, as well as the primary plot, which will make you feel as if you’re a part of the full Blue Protocol Journey. Blue Protocol’s cutscenes are all stylized, and the anime-style artwork will quickly captivate you.

Additionally, Blue Protocol emulates Genshin’s simplicity without detracting from the standard MMO experience. The user interface is straightforward, and you quickly get used to the fight.

Blue Protocol improves Genshin’s battle system in many ways, one of which is via its global bosses. You cannot face the global bosses in Genshin unless you go to particular areas.

And you only engage in combat with them if you need their supplies. Blue Protocol randomizes this mechanism, and you may face a global boss during a routine exploration expedition, forcing you to strategize on how to defeat this formidable adversary.

Unlike Genshin’s resin system, which restricts your ability to play the game as much as you like, there are no such restrictions with Blue Protocol, and you may enjoy it to the utmost whenever you want.

The game successfully combines some of the greatest characteristics of open-world RPGs with MMO elements.

As A Genshin Impact Supporter, Should You Try Blue Protocol?

Blue Protocol may be an enjoyable experience for Genshin gamers seeking a more intense experience. However, Bandai Namco’s MMO is far from ideal.

Players who participated in the betas remarked about how unclear fetch quests may be and how much inventory management improved.

If you’re a Genshin player who enjoys mixing skills and components, taking on monsters, and wishing Impact provided an unending amount of repeating content, Blue Protocol may be for you.

It certainly seems good, and if you’re seeking the next great anime role-playing game, Blue Protocol may satisfy your need.

Bandai Namco has remained mum on a Japanese release date, although this year is likely to happen. While a Western release is still some time away, it may be the next huge anime RPG everyone speaks about whenever it happens.