Dune: Spice Wars Is a Thrilling Blend of Real-time Strategy and Political Manoeuvring.

Dune: Spice Wars is a real-time strategy game set in the desert world that we’ve seen so much of in the novels, films, and other Dune games, but it’s not just about moving an army about; it’s also about the alliances and economy of Dune’s larger galaxy.

I observed as a House Atreides player stretched out from a single starting area to explore the surface of Arrakis while simultaneously participating in imperial intrigue during a recent hands-off presentation, which you can see in the new video above.

This is very compatible with the 4X DNA featured in Spice Wars. Desert expanses define delineated areas, each of which has a tiny village.

Conquering the settlement grants possession of the land, and each part of the desert may be mined for resources such as Spice for commerce, Plascrete for construction, or a variety of rare commodities to sell for cold hard cash.

Taking territory is not as simple as picking a few men and marching them over, like in a Command & Conquer game. Factions such as the Atreides may capture little towns discreetly; however, it takes longer.

They may also roll soldiers in, but this is costly and dangerous: Locals resist, and capturing one town will enrage others since Fremen outlaws will invade your region. Additionally, any soldiers that go beyond your territory are automatically timed: They will rapidly perish if they run out of provisions. 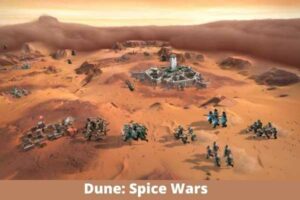 The desert is not a uniform sand area. Deep Deserts are the equivalent of seas in other 4X games, and foot troops quickly run out of supplies and are in danger of being attacked by sandworms.

Meanwhile, unique regions such as the polar ice caps may provide resources that would be difficult to get otherwise. Water is “going to be an issue,” marketing head Adrien Briatta said during the televised event. Players will gravitate toward the ice cap near the north pole, signaling the start of combat.

To take control of Dune, it will be necessary to use deft use of soft political currency and operatives to infiltrate and persuade influential groups. Meanwhile, your hard resources are dedicated to bolstering such plays via the expansion of your on-world assets.

Dune is a work of science fiction that is considerably more political than military in nature, and Spice Wars seems to recognize this. Though the game takes place entirely on Arrakis, success requires understanding the Imperium’s larger politics and factions.

Players will seek favor in the Landsraad by attempting to pass resolutions and ordinances that benefit them personally. The objective is to be nominated Governor of Dune, but it will be difficult to engage in excessive armed combat.

Landsraad favor is simply one of the currencies available to gamers. Your Authority contributes directly to the satisfaction of groups like the Spacing Guild, Bene Gesserit, and Emperor.

Additionally, the Spice sales and distribution corporation CHOAM purchases all Spice that you do not personally hoard—and you must hoard some since the Emperor also requires a direct tax in Spice. (You may have heard that it must flow someplace.)

Dune: Spice Wars will be available on Steam in Early Access this spring. There will be multiple multiplayer factions in future updates, and the whole story will be added to that incomplete version.

Previous article
Dune: Spice Wars Gameplay Reveals an Isometric, Open Environment Filled With Combat.
Next article
Big Little Lies Season 3 Could Be Out in 2022, and It Could Be Renewed or Confirmed.