‘Big Little Lies is a fascinating narrative about a group of women in Monterey, California, whose lives spin out of control when they get embroiled in a murder investigation.

The show’s cast of characters progressively exposes its depths, culminating in heartbreaking discoveries. The darkly comedic tone of the program makes for some binge-worthy viewing.

Based on Liane Moriarty’s novels written and created by David E. Kelley, the miniseries aired for two seasons and garnered an astounding array of awards and critical praise.

However, season 2 ends on a sad note, leaving many committed fans in the dark regarding the possibility of a third season. If you’re wondering the same thing, you’re at the right place! This concludes our coverage of ‘Big Little Lies.’ 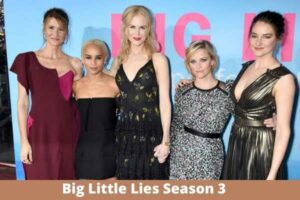 The 2nd season of ‘Big Little Lies debuted on HBO on June 9, 2019, and finished on July 21, 2019. Despite the show’s roots as a miniseries, Moriarty was inspired by the show’s immense success to write a follow-up novella to her eponymous novel, resulting in the show’s highly anticipated season 2.

In season 3, there is exciting news that another darkly comic series may be in development. Nicole Kidman, the lead actress and executive producer has said that preparations are already for the third season. Still, they would only advance if the original cast members returned.

As it turns out, this is an ambitious objective that will need some scheduling flexibility.

In January 2021, it was found that series producer David E. Kelley hinted at a future season. He did, however, note that scheduling and logistics would be a huge challenge given the demanding schedules of the show’s ensemble cast.

Other aspects of a hypothetical season 3 seem more optimistic, as Kidman promised listeners of ‘JAM Nation with Jonesy & Amanda’ in 2020 that a third season was “concocted” and Moriarty was working on a book (which would undoubtedly form the backbone of the potential season 3 plot).

Kidman said in a subsequent interview that the show’s core cast members were unanimous in their support for a second season and that Kelley and Moriarty (as writers) had a really good premise for it.

Must read: Behind the scenes of the making of Eternals with Disney Plus and Marvel Studios

Additionally, HBO & HBO Max Content Chief Casey Bloys has shown an interest in collaborating with “this group of folks” (referring to the creative team behind ‘Big Little Lies). Bloys, though, highlighted that the cast members’ demanding schedules would make securing all of them simultaneously for a coming season 3 very unfeasible.

Thus, it seems as if the possibility of a third season of ‘Big Little Lies has a lot going for it, and its release is likely just a matter of time. Given that season 2 was likewise not “officially” planned but received superior ratings than season 1, there are high hopes for a possible third season.

If the project is greenlit expeditiously and given the scheduling nightmare it may become, we may predict a mid-to-late-2023 premiere date for ‘Big Little Lies season 3.

Bonnie also informs the group that she plans to confess to the murder of Perry, and the season finale depicts the other four women escorting her to the police station.

Given that the show’s central “lie” has been revealed, the story may take a variety of twists and turns in a potential third season. The show’s writing has always gained critical praise, and the third season will have some new narrative aspects and plot arcs.

The impact from Bonnie’s big announcement is likely to be one of the most anticipated elements of a coming season 3, which may then focus on the Monterey Five’s other members.