Since Christmas, American Underdog has been in theatres, and the film features former Montreal Alouettes quarterback Tanner Marsh.

Marsh, who played in La Belle Province from 2013 to 2015, was recruited by his Arena Football League contacts to assist the film’s QB extras who were taking a beating.

“They were taking some significant knocks, and I received a call from a former teammate, Clint Dolezel. He was the head coach of the Philadelphia Soul, and during my year with the Cleveland Gladiators, I met several AFL coaches,” Marsh said.

“He contacted me because I was in Dallas, and the film was being shot in Oklahoma City, and they needed an additional man. ‘Yes, I’ll gladly do that,’ I said. I got out there, and although a lot of the men stayed for a month or a month and a half, I just stayed for two weeks.” 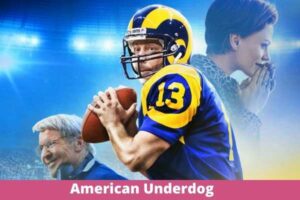 His job sounded like that of a mere extra in some very monumental events, and the same might be said about the Ottawa Redblacks’ new quarterbacks coach, Will Arndt, a former CFL player.

“When I first came in, I was an extra for Kurt Warner; whenever you see Kurt Warner throwing the ball, it’s almost always Will. Rather than serving as a Kurt Warner counterpart, I was given a chance to serve as the quarterback Kurt Warner would bench; I was often the backup,” Marsh said.

“There is a sequence in there, a collegiate scene, in which I do a rollout and throw the ball while being shouted at. It’s rather amusing in the film when the guy portraying the college coach shouts, ‘Dammit Tanner!’ He addresses me by my first name in the film, which is rather amusing.”

“As I get to the sideline, you’ll see me remove my helmet, and as I do, Kurt Warner, portrayed by Zachary Levi, is like, ‘Hey, coach, put me in! Allow me to have a chance!’ That was a significant sequence that I was able to perform.”

“Basically, in all of the other situations, I was either a background character or the one snapping the ball for them in certain locations. I was the person in the background during meetings. You’ll see me a lot; if you’re a die-hard CFL fan and are familiar with my appearance, you’ll see me a lot in that film.”

Marsh thinks he was paid around $200 per day when rehearsing for a scene and $350 per day while shooting, or more depending on the number of hours of film required on that specific day.

He acknowledges that extras on large film sets long work hours and expresses sympathy for the other quarterbacks who were forced to slog it out for up to six weeks.

“I’m not sure how those men lasted that long, considering we were there for up to 17-18 hours at a time. You’re standing there doing nothing because, legally, we’re not unionized, and hence have no say over how long extras must be present,” Marsh said.

Also check: Behind the scenes of the making of Eternals with Disney Plus and Marvel Studios

“Fortunately, we had Zachary Levi, who is an excellent actor and an all-around kind person, so there were a couple of moments when he said, ‘Hey, these folks should go home.’

That is because we were out there for an extended period. I have this placard on my desk – it’s rather amazing — Zachary Levi presented it to all of us quarterbacks after we completed.”

Marsh displayed a duplicate of the memo. We appreciate your efforts. You are a true rock star. Never forget this. ~Z

The now-retired quarterback, who did serve as an emergency quarterback in the Arena League before his career ended, spends his summer in his native state of Texas instructing quarterbacks and certain CFL players.

He has a positive connection with his former Alouettes position coach, Ryan Dinwiddie, now the Argos’ bench manager. He would not rule out a return to the CFL or Canada in general since his fiancée is from Montreal.

“I like Canadian football and Montreal, so if the right chance presents itself, I’m sure we’ll take it,” Marsh said.

As for the film itself has generated over $26 million too far and has plenty of time to catch up to Oliver Stone’s 1999 blockbuster Any Given Sunday, which featured Steamin’ Willie Beamen passes thrown by a young Calgary Stampeders backup quarterback named Henry Burris. On the other hand, Marsh is pleased with how everything ended out.

“It’s an excellent film; I even shed a tear or two.” They do an excellent job at depicting Kurt Warner’s life and revealing facts about him,” Marsh added. “I’m telling you, you have to go see it – it’s fantastic.”