Any ardent Ozark fan has almost certainly already consumed the first half of the show’s last season (which premiered on January 21), and you’re probably wondering when the next fix will come. The season’s odd structure will effectively conclude the story, and only God knows if the Byrde family’s money laundering activities will come to a stop and they will be able to return to Chicago quietly. This does not seem plausible, particularly given that the series has hinted at a massive vehicle catastrophe.

Additionally, Ruth Langmore concluded the half-season in wrath, which was quite justified in light of the death of her cousin, Wyatt, who Javi slew after his murder of Darlene. Ruth spotted the scene and immediately approached Marty, demanding who had committed the crime. She pledged unwaveringly that the murderer would face justice. Of course, Jonah revealed Javi’s name, and despite Marty’s warnings against revenge, it’s doubtful that Ruth would listen to him. 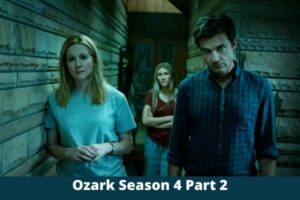 When will the ramifications subside? Netflix has not specified a specific date, but we may make an educated prediction based on the streaming service’s previous seasons. The first installment of Masters of the Universe: Revelation was released on July 23, 2021, followed by the second installment on November 23, 2021. Unsolved Mysteries’ first half-season premiered on July 1, 2021, followed by the remainder on October 19, 2021.

Thus, Netflix seems to function with a gap of between four and six months throughout split seasons. We should learn more soon, but fingers crossed for a summer Ozark finale.